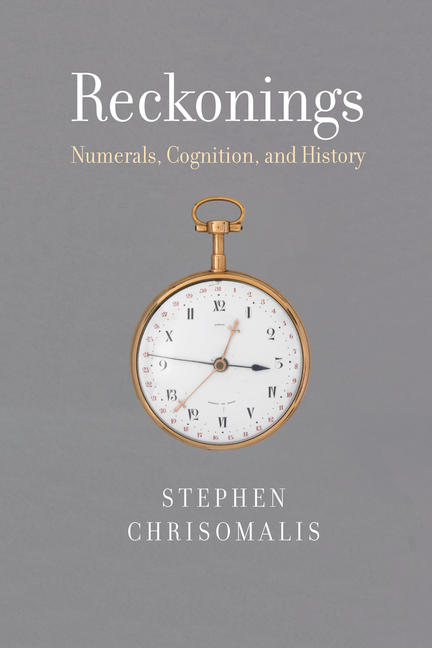 Insights from the history of numerical notation suggest that how humans write numbers is an active choice involving cognitive and social factors.

Over the past 5,000 years, more than 100 methods of numerical notation—distinct ways of writing numbers—have been developed and used by specific communities. Most of these are barely known today; where they are known, they are often derided as cognitively cumbersome and outdated. In Reckonings, Stephen Chrisomalis considers how humans past and present use numerals, reinterpreting historical and archaeological representations of numerical notation and exploring the implications of why we write numbers with figures rather than words.

Chrisomalis shows that numeration is a social practice. He argues that written numerals are conceptual tools that are transformed to fit the perceived needs of their users, and that the sorts of cognitive processes that affect decision-making around numerical activity are complex and involve social factors. Drawing on the triple meaning of reckon—to think, to calculate, and to judge—as a framing device, Chrisomalis argues that the history of numeral systems is best considered as a cognitive history of language, writing, mathematics, and technology.

Chrisomalis offers seven interlinked essays that are both macro-historical and cross-cultural, with a particular focus, throughout, on Roman numerals. Countering the common narrative that Roman numerals are archaic and clumsy, Chrisomalis presents examples of Roman numeral use in classical, medieval, and early modern contexts. Readers will think more deeply about written numbers as a cognitive technology that each of us uses every single day, and will question the assumption that whatever happened historically was destined to have happened, leading inevitably to the present.

Stephen Chrisomalis is an assistant professor in the Department of Anthropology at Wayne State University.

“For a fresh account of the hows and whys of evolving number systems over the past 5500 years and on into the future, here’s a book by cognitive anthropologist Stephen Chrisomalis. His threefold approach in Reckonings is to examine number with respect to structure, purpose, and transience, and in doing so, he cautiously avoids overgeneralizing, ever mindful that the Latin maxim exceptio probat regulam ought to be translated as 'the exception probes the rule.' Thus, Chrisomalis habitually inserts curious richness into his narrative.”
—The Mathematical Intelligencer
“Stephen Chrisomalis has written a compelling and thoroughly entertaining account of how numbers came to be used and represented. [. . . ] I strongly recommend this book for readers interested in the broad sweep of human history from an information lens. [. . . ] Reckonings serves as an enlightening example of how the fundamentals of information cannot be understood by a single discipline.”
—Information & Culture

“Reckonings is one of those oddities in academia. A highly specialist, niche publication that somehow manages to be entertaining and relevant for people who have little expertise or interest in the central topic. [ . . . ] Like a good ethnographic account, the headline is merely the starting point for an interrogation of society. Chrisomalis uses numbering systems to explore broader issues of cognition and culture. [ . . . ] Reckonings takes its readers on an historical tour to understand important changes in the use of number systems that is an exemplar for how we might integrate diachronic and synchronic data and methodologies to better understand change in any cultural system.”
—Journal of the Royal Anthropological Institute

“Chrisomalis has written a compelling and thoroughly entertaining account of how historically numbers came to be used and represented. The book serves as an enlightening example of how the fundamentals of knowledge cannot be understood by a single discipline; they require the complementarity of several knowledge fields such as philosophy, sociology, and education. We strongly and enthusiastically recommend this book to all readers interested in the broad understanding of human history, as well as the history of human mathematics, from these informational lenses.”
—Journal of Humanistic Mathematics​
“The book has the tone of public scholarship á la Steven Pinker or Jared Diamond rather than a volume exclusively for professional anthropologists, although its material may be challenging for the average reader. For anthropologists, it also achieves two other noteworthy things: it supports and offers a method for cross-cultural and transhistorical comparison (transcending the universalist/particularist dichotomy), and it urges anthropology to take number systems more seriously rather than consigning them to a distant second place behind language.”
—Ethos

Other titles by Stephen Chrisomalis