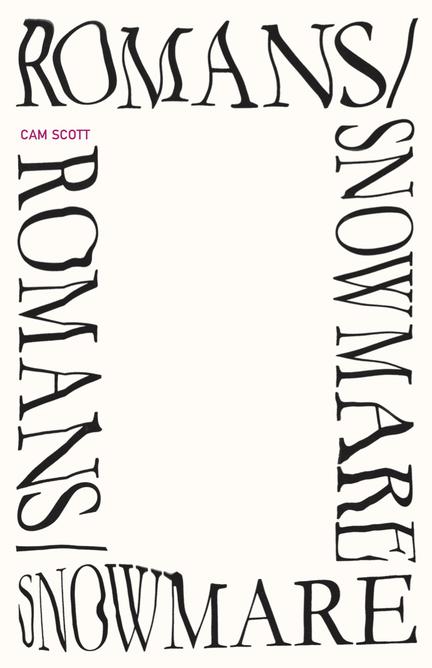 Both a daybook of anti-capitalist ideation and a homoerotic reinvention of the prairie long poem, this unique debut resonates with a love of language and experiment.

Written from within the strictures of the working day, the book's title poem issues from a practice of daily collage, comprising the first layer of a potentially interminable personal epic. As a lyric counterbalance, a centralsection follows a punk band throughout dozens of countries connected by and subjugated to capital.

These poems attempt to preserve the superficiality and sincerity of fast-paced social engagement, alluding to the material conditions that permit some people--tourists, artists, musicians--free movement at the expense of others. Playful and meticulously written, ROMANS/SNOWMARE deftly circles the perimeter of the self while drawing the communal inward.

Cam Scott is a poet, critic, and non-musician from Winnipeg, Manitoba, Treaty One Territory. His chapbook, WRESTLERS, was published by Greying Ghost in 2017. He performs and Cold-catcher and as part of the duo Swolowes, among many other projects, pairings, and collaborations.

"These are texts written in overlay to an actual world, where an author’s subjectivity refracts surroundings. They also happen to be some of my favourite …