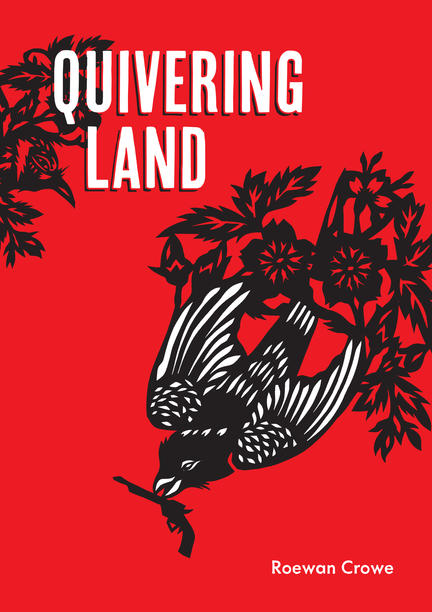 Roewan Crowe's compelling and haunting literary debut, Quivering Land, is a rather queer Western, engaging with poetics and politics to reckon with the legacies of violence and colonization in the West.

Written in a sparse style, this lonely, sometimes brutal book invites the reader on a powerful journey with Clem, Violet, and a dead girl in a red dress. Clem, a lone cowboy, caught in the inevitable violence of the Western, compulsively rides through ghost towns and Monument Valley. Violet is an artist who pulls dead bodies, guns, and memory into her studio, immersing herself in a creative process, seeking to understand the relationships among aggression, vulnerability and the imagination. Disrupting the story are the ghostly visitations of a dead child who travels the western landscape unsettling romanticized, filmic images of Monument Valley.

Interspersed in the text are fragile, beautiful images painstakingly cut from paper, created by artist Paul Robles. This experimental long poem, a gritty feminist meditation on trauma, violence and the possibilities of art, is as powerful as a Smith and Wesson Schofield rifle.

Artist and theorist Roewan Crowe is energized by acts of disruption, transformation and the tactical deployment of self-reflexivity. She has a particular interest in wounded landscapes and questioning what it means to be a queer, feminist settler living in Winnipeg/Turtle Island. Recent work includes: digShift (ongoing), a decolonizing and environmental reclamation project using site specific performance and multichannel installation to explore the shifting layers of at an abandoned gas station; and Queer Grit, a stop-motion animation that asks, “how can you be Queer on the prairies when your dad is John Wayne?” Her scholarly work seeks to open meaningful encounters with art and explore new feminist art practices. Her longstanding community practice is concerned with building engaged feminist/queer/artist communities, and in addressing the reality of Murdered and Missing Indigenous Women in Canada. She is an Associate Professor in the Women's and Gender Studies Department at the University of Winnipeg and Co-Director of The Institute for Women's & Gender Studies.

Roewan Crowe's debut long poem Quivering Land, wrangles up violence and trauma in the lasso of a queer Western. Juxtaposed with visual artist Paul Robles' gorgeous paper-cut images of birds, guns, cowboy hats, and horses, these poems conjure memory, old Hollywood westerns, devastation, and the colonization of the west. Crowe introduces the poetic work within a feminist framework with three epigraphs by literary legends Adrienne Rich, Nicole Brassard, and Marguerite Duras. In the collections first poem, "Her Western Landscape," she introduces Clem, who is sitting in the house her father built on the edge of town, and carries us through the narritive of ,em>Quivering Land.. Within a queer lens, Crowe raises important questions of gender, sexuality, and the various shards of identity. She asks what are the lines drawn on land, the markings on bodies, and brutality of survival. Where language quivers, its the lines between the lines; the landscape of Crowe's poetry that distills memory, meaning and loss. Quivering Land captures the endless shadows a western sunset truly casts. - Shannon Webb-Campbell for the Telegraph journal