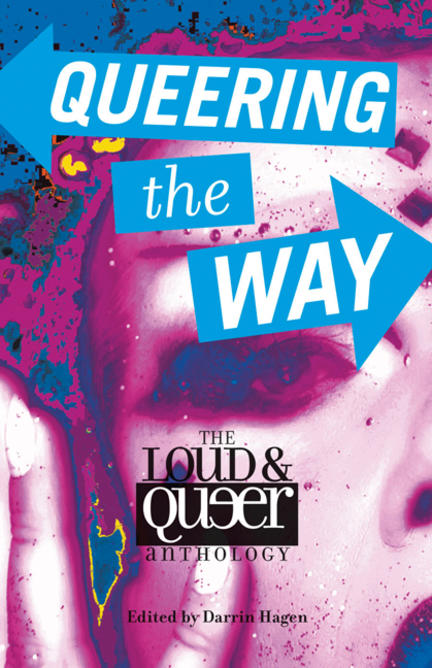 Edmonton’s Loud & Queer Cabaret has been blazing trails and shining a light on Queer arts and culture for twenty years. The showcase has debuted more than three hundred pieces of stunning performance and art from both established and emerging talent alike.

From the Loud & Queer Cabaret archives, here are some of the most memorable pieces, from monologues to cabarets to one-act plays. Diversity of the LGBTQ experience is at the heart of this powerful collection. Voices ring out with stories and perspectives that will make you laugh, cry, and glow with Pride. This heartfelt anthology is a testament to great courage, a celebration of art, and the power of authenticity.

Darrin Hagen is a freelance playwright, writer, composer, performer, director and Drag Artiste. He is also the artistic director of the award-winning independent theatre company Guys In Disguise, Canada's leading theatre company when it comes to cross-dressing comedies, and which not only co-produced the L&Q Cabaret for 2 decades, but also tours and promotes Queer theatre across Canada and in the U.S. He has spent decades researching the LGBTQ history of Edmonton and transforming it into theatrical productions, bus tours, and photo exhibits. He is the author of The Edmonton Queen: The Final Voyage, and Tornado Magnet: A Salute to Trailer Court Women, as well as the editor of Queering the Way: The Loud & Queer Anthology, all published by Brindle & Glass Publishing. Plays by Hagen include The Empress & The Prime Minister; Witch Hunt at the Strand; BitchSlap!; The Neo-Nancies: Hitler's Kickline; Buddy; With Bells On; The Glory, The Fury; Inventing Rasputin; Tornado Magnet and The Edmonton Queen. He has received seven Sterling Awards for his work in Edmonton Theatre. Witch Hunt at the Strand and Buddy were both nominated for Sterling Awards for Outstanding New Play; With Bells On was nominated for a Betty Mitchell Award and a Sterling Award for Best New Play; and The Edmonton Queen received a Sterling Award for Outstanding New Fringe Work. Hagen also received an AMPIA for Best Male Host for his work on the Life Channel Series Who's On Top?

With his collaborator, Trevor Schmidt, he has created the award-winning Flora & Fawna’s Field Trip; Prepare for the Worst!; Puck Bunnies; Don’t Frown at the Gown; and the musical Klondykes.

He was recently named by the Alberta Foundation for the Arts as one of the 25 most influential artists in Alberta in the last 25 years. He was inducted into the Q Hall of Fame Canada for his contribution to Queer culture. In 2005, Hagen was named as one of 100 Edmontonians of the Century to mark the city's centennial. His name came alphabetically after Gretzky. To the best of his knowledge, he's the only Drag Queen on that list.

On its richest level, this book is a testament to both the pain and joy that affects people's lives. Diving into difficult subjects that society would rather skirt around, the anthology also expresses an exposed sense of fear. . . . To take in a collective work, especially one so diverse as the Loud & Queer Anthology, is not an easy task. There are so many different points of life addressed in such a small, innocent-looking volume that it can be overwhelming. Yet because of this, it bursts with life. Queering the Way is a resounding work, with the utterly unmistakable qualities of authenticity and pride. —The Gateway

What better way to celebrate the twentieth anniversary of Western Canada's longest-running queer arts showcase than with a book of some of the finest work from LGBTQ writers and performers across Canada? —Prairie books NOW

As with all artistic expression, these pieces not only represent a moment or a collection of moments for the artist—they also pull something out of the collective memories and experiences of their respective environments . . . Throughout this anthology [editor Darrin] Hagen pulls together the disparate and diverse cultures, perceptions and experiences that have formed queer artistic expression in Alberta for decades. —rabble.ca

Poignant, funny, sad and titillating: Queering the Way offers an interesting read, and a wonderful recap and celebration of how far the [Loud & Queer] festival and Alberta’s LBGTQ community in general has come in the past 20 years. —GayCalgary and Edmonton Magazine

Other titles by Darrin Hagen

A Salute to Trailer Court Women