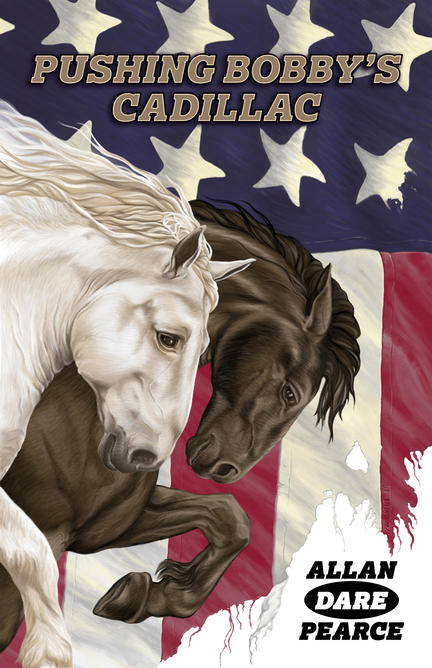 Living in Windsor, Ontario, he suffers bleak visions and nightmares—flashbacks to the killing, the slaughter of the Essex Scottish Regiment on the shale beaches of Dieppe. His wife, the elegant former professor Paris Day, has run off with a civil rights group whose members have traded peaceful protests for violent bank heists, and their son Adam, a young black man in a white, white world, seems ready to follow in her footsteps.

While Aiken sets off to discover the truth behind an FBI story about his wife, Bobby Kennedy and his team criss-cross the US on his run for the Democratic nomination for the presidency, campaigning to end racial discrimination and the Vietnam war.

A sprawling, Pynchonesque novel that spans Canada and the US, Pushing Bobby’s Cadillac explores the hope and anguish spawned by the year 1968.

Allan Dare Pearce, “Dare” to friends and colleagues, was awarded a B.A. and LL.B. degree from the University of Windsor. He attended on a Department of Justice fellowship at the University of Ottawa where he received a post-graduate diploma in legislative drafting. He was subsequently awarded an LL.M. degree from Leicester University in the UK. Mr. Pearce is a member in good standing with the Law Society of Upper Canada. He has been a member of the Law Society of the Northwest Territories, Chief Legislative Counsel for the Government of the Northwest Territories, and a counsel with the Privy Council Office Section of the Department of Justice. He is the author of two previous works of fiction, Paris in April and Hitler Burns Detroit, available in most ebook formats.