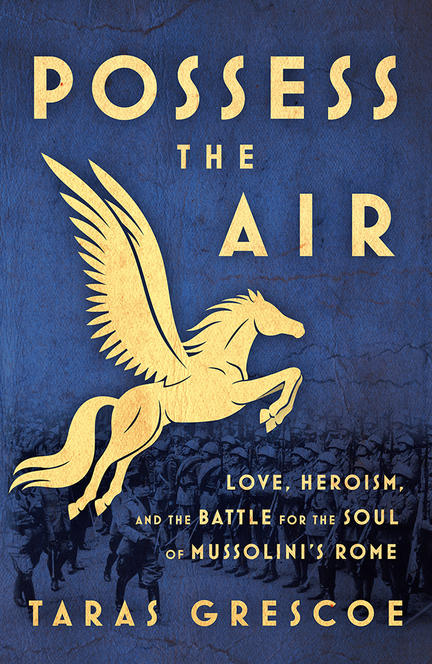 A Globe and Mail Fall 2019 Book to Watch

Whoever you are, you are sure to be a severe critic of Fascism, and you must feel the servile shame. But even you are responsible for your inaction. Do not seek to justify yourself with the illusion that there is nothing to be done. That is not true. Every person of courage and honour is quietly working for a free Italy. Even if you do not want to join us, there are still TEN THINGS which you can do. You can, and therefore you must.

These unsayable words, printed on leaflets that rained down on Mussolini’s headquarters in the heart of Rome at the height of the dictator’s power, drive the central drama of Possess the Air. This is the story of freedom fighters who defied Italy’s despot by opposing the rising tide of populism and xenophobia. Chief among them: poet and aviator Lauro de Bosis, firstborn of an Italian aristocrat and a New Englander, who transformed himself into a modern Icarus and amazed the world as he risked his life in the skies to bring Il Duce down. Taras Grescoe’s inspiring story of resistance, risk, and sacrifice paints a portrait of heroes in the fight against authoritarianism. This is an essential biography for our time.

TARAS GRESCOE is the author of four books, including the bestselling Bottomfeeder, which won the 2008 Writers’ Trust Non-Fiction Prize and the Mavis Gallant Prize for Non-fiction. Two other titles, Sacré Blues and The End of Elsewhere, were shortlisted for Writers’ Trust awards. His work has appeared in a great variety of major publications including The New York Times, National Geographic Traveler, Gourmet, The Globe and Mail, Canadian Geographic, The Times (UK) and The Independent. He lives in Montreal. Visit him online at www.tarasgrescoe.com.

Excerpt: Possess the Air: Love, Heroism, and the Battle for the Soul of Mussolini's Rome (by (author) Taras Grescoe)

Prologue: The View from the Janiculum

Weary of dodging gelato-eaters and rushing motorini, a lucky walker in Rome may be lured out of the teeming streets of Trastevere by the prospect of the upward-sloping paving stones of the sicamore-shaded Via Garibaldi. To the right, a sidestreet dead-ends in flights of well-worn stone steps, bordered on one side by fortifications built by a third-century emperor to repel barbarous Germanic tribes.

The staircase ascends, alongside crumbling bricks overgrown with wildflowers and canary-grass, to a piazza dominated by a striking monument in luminous travertine limestone. The Fontana dell’Acqua Paola is a confection of the high Baroque, built around five niches—divided by columns of red granite, and topped by high-perched griffins, lines of stone-cut Latin, and a gossamer iron cross—out of which water gushes into a cerulean basin, as shallow as it is enticing. Built by a seventeenth-century Pope, it is fed by the same ancient aqueducts that once filled Trastevere’s naumachia, an artificial lake where the Emperor Trajan staged mock naval battles using galleys rowed by real slaves. Taxi drivers know it simply as the fontanone, the big fountain. Of Rome’s two thousand municipal fountains, it is the only one in which citizens are permitted to bathe during summer heat waves.

The Fontana dell’Acqua Paola, however, is merely the backdrop to a far more impressive spectacle. Crossing the paving stones of the semi-circular piazza, the fortunate stroller approaches a curved stone balustrade, which projects like a proscenium over the most sumptuous of playhouses. Just beyond the high canopies of thin-trunked umbrella pines, the first metropolis of the world unscrolls to the limits of peripheral vision.

In the foreground, quadrilaterals of weathered stucco in hues of ochre and pink form a Cubist jumble, jostling around a bend in the Tiber that snags Trastevere, the most ancient and authentic of Rome’s rioni, or central neighbourhoods, like a bishop’s crozier. Across the river, the hemispheric roof of the two-millennia-old Pantheon, the largest dome in the world until well into in the twentieth century, protrudes from Rococo cupolas, a concrete barnacle cemented fast to the medieval and Renaissance city. And, white as sun-bleached baleen, the Brescian marble of the Vittoriano, that pretentious monument to the earthiest of Italy’s kings, rises against the Impressionist smear of blue on the horizon, the foreboding Sabine and Alban hills.

The Latin satirist Martial, who owned a villa near the crest of the Janiculum, wrote of this view: “From here you can see the seven lordly hills, and measure the whole of Rome.”

The only reminders that this is the second decade of the twentieth-first century are the cellphone masts that bristle from certain strategic eminences, and the occasional contrail of an airplane that scumbles a sky notably unscraped by towers of glass and steel.

One hundred years ago, a young man, newly arrived from New York, leant on this same balustrade and, contemplating his uncertain future, consoled himself with the enduring glory laid out before him. Humans and their problems came and went, he mused, but Roma—the Urbs Aeterna, the Caput Mundi, the Città Eterna—would always abide. Its persistence across the centuries seemed to offer a salutary rebuke to an unhealthy obsession with the present.

The young man was wrong about Rome. It has never been exempt from history. From the Janiculum, “the balcony of Rome,” observers have watched the flames that leapt up from the Temple of Jupiter as Sulla sacked the Forum, the cannonballs that burst in the Piazza Barberini after French troops dislodged General Garibaldi from the Villa Aurelia, and the columns of smoke that rose from the rubble of the San Lorenzo district after its carpet-bombing by Flying Fortresses in the dying days of the Second World War.

And on that autumn day in 1920, the cast was already assembling in the streets below for the next revolutionary act in the city’s ongoing drama. In the salons and cafes, war-maddened poets, drunk on velocity and technology, were calling for the burning of St. Peter’s Basilica and the razing of the Colosseum. Across the river in Testaccio, red flags were flying from the roofs of workshops occupied by laborers hoping to bring the Bolshevik revolution to Italy. Black-shirted war veterans, who were even then terrorizing peasants and workers throughout the country, were setting their sights on Rome as the ultimate prize in a new battle for Italy.

None of that, of course, could be perceived by the young man leaning on the balustrade perched on the Janiculum. As he turned towards the Fontana dell’Acqua Paolo, to walk the hundred yards back to his new home at the American Academy in Rome, this visitor from the New World was conscious only of being young, happy and alive in the timeless, the unchanging, the Eternal City.

Except that everything was about to change, for him and for everyone he knew. Between the ancient cobblestones, modernity’s most corrosive doctrine was already sending down deep roots. Fascism’s time had come. Only a rare few would perceive the danger, and begin to resist.

Rome, Italy, Europe, and the world would never be the same.

Praise for Possess the Air

“Compelling...Set during Fascism’s glory years, Possess the Air is about resisting tyranny. It’s about the courage required to defy an autocrat even when the gains will be small.”
—Literary Review of Canada

“Possess the Air is a beautiful read, and the focus on Rome should open our eyes to how threats to civic liberty can often evolve into concrete form.”
—Quill & Quire

“Possess the Air is a massive project, combining research that’s deep yet deployed with a light touch, the smooth stag-managing of dozens of historical figures of varying fame and notoriety, a blend of the macro (sweeping social changes) and the micro (love stories, individual crises of conscience.) Yet Grescoe makes it look easy... Taras Grescoe has performed an act of resurrection, and done it with flair.” —Montreal Review of Books

“Superb—an object lesson is what befalls a country that embraces an autocratic strongman as its would-be saviour.”
—Winnipeg Free Press

“Masterfully constructed, elegantly composed, this is a books to be savoured by anyone with an appetite for what Henry James called ‘the luxury of loving Italy.’ It’s an important books, offering a way through the present by way of connection with a complicate past.”
—ACCENTi

“In the age of Trump, Mussolini—half-clown, half-tyrant—returns to our minds more readily that does that fanatic of fanatics, Adolf Hitler. Readers of Taras Grescoe's racy study will learn much about what happened to those, both foreign and Italian, who rejected the Duce's fake truths even at the sacrifice of their own lives. Their story can help us today resist the populist nationalists who crowd our screens with their lies and superificialities.”
—R.J.B. Bosworth, author of Mussolini and The Oxford Handbook of Fascism

“Wow! This book is an absolute tour de force—a fact-driven work of historical imagination at once fresh, relevant, and irresistible. While tracking the rise of Italian fascism through the 1920s and ’30s, Taras Grescoe conducts a master class in applying novelistic techniques to a research-based narrative. By telling this story through individuals who lived it, Grescoe has created a literary experience that revives the idea of the nonfiction novel.”
—Ken McGoogan, author of Flight of the Highlanders: The Making of Canada

“In Possess the Air, Grescoe merges impressive scholarship with deft storytelling to bring readers to a Rome we've never known—even though Mussolini's Make-Italy-Great-Again bombast will feel uncomfortably familiar. As much a biography of a city as the characters who dwell there, Grescoe's book hums and shines.”
—Marcello Di Cintio, author of Pay No Heed to the Rockets: Palestine in the Present Tense

“Taras Grescoe has fallen hard for the 'the wicked old Paris of the Orient,' its barrooms thick with gangsters and newsmen, its alleys 'scented with sweet almond broth, opium smoke and the chemical bite of Flit insecticide' . . . Shanghai Grand is a headlong swoon for old Shanghai. The feeling is easy to catch.”
—New York Times Book Review

"Filled with excellent short character sketches and keeps the reader turning the pages to find out what will happen next . . . Brings to life a special time and a special place."
—Wall Street Journal

“A keenly observant, sometimes soulful portrait . . . of China’s political and social realities during that tumultuous period in its history. . . . A wonderful book.”
—Publishers Weekly

“Grescoe exuberantly captures the glamour and intrigue of a lost world."
—Kirkus Reviews

Other titles by Taras Grescoe

The Devil's Picnic, Bottomfeeder, and Straphanger

Travels Through the Underworld of Food and Drink

A Seafood Lover's Journey to the End of the Food Chain

The End of Elsewhere

Travels Among the Tourists