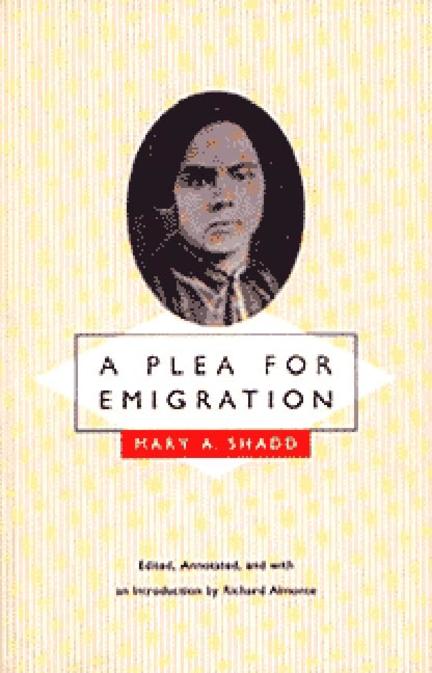 Originally published in 1852, Mary A. Shadd's A Plea for Emigration; or, Notes of Canada West appears here for the first time in print since the 1850s. Many emigrant guides have been accorded classic status in the realm of early Canadian literature, among them Susanna Moodie's Roughing It in the Bush and Catherine Parr Trail's The Canadian Settler's Guide. Shadd's document sheds new, intriguing light on Canadian history and African-Canadian realities in the nineteenth century.

Mary Shadd, the author of A Plea for Immigration, was born in Wilmington, Delaware, in 1823, and emigrated to Canada Waet in 1851. She was an abolitionist, advocate for women’s rights, tirelesss activist for the rights of African Americans and Africans Canadians, and worked as a writer, teacher, newspaper publisher, and lecturer.

Richard Almonte lives in Toronto, where he works in book publishing. He is also working on his doctorate in Canadian literature at McMaster University. Recent publications include work in FUSE magazine and a chapter in Rude: Contemporary Black Canadian Cultural Criticism (Insomniac, 2000). Research into Toronto’s nineteenth-century African-Canadian community led Almonte to Mary Shadd’s A Plea for Emigration and A Narrative of Thomas Smallwood.

Other titles by Richard Almonte

Canada's History magazine created a fantastic of list of great Canadian women; we've made a reading list to go alongside it.