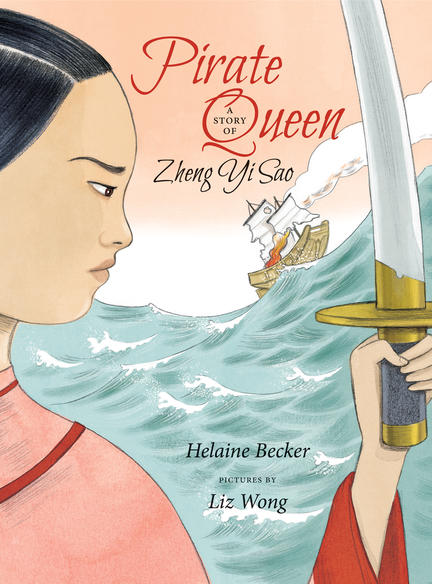 An inspiring story of Zheng Yi Sao, the real-life pirate queen who took control of her life — and the South China seas — in the early 19th century.

The most powerful pirate in history was a woman who was born into poverty in Guangzhou, China, in the late 1700s. When pirates attacked her town and the captain took a liking to her, she saw a way out. Zheng Yi Sao agreed to marry him only if she got an equal share of his business. When her husband died six years later, she took command of the fleet.

Over the next decade, the pirate queen built a fleet of over 1,800 ships and 70,000 men. On land and sea, Zheng Yi Sao’s power rivaled the emperor himself. Time and again, her ships triumphed over the emperor’s ships.

When she was ready to retire, Zheng Yi Sao surrendered — on her own terms, of course. Even though there was a price on her head, she was able to negotiate her freedom, living in peace and prosperity for the rest of her days.

An author’s note provides historical context and outlines the challenges of researching a figure about whom little is known.

CCSS.ELA-LITERACY.RL.2.3
Describe how characters in a story respond to major events and challenges.

HELAINE BECKER is the author of numerous of books of fiction and non-fiction for children, among them the best-selling A Porcupine in a Pine Tree and its sequel, Dashing Through the Snow: A Canadian Jingle Bells, The Haunted House That Jack Built and Little Jack Horner, Live from the Corner. Her books have won the Silver Birch Award and the CBA Libris Award and have been shortlisted for the Red Cedar, the Hackmatack and the Rocky Mountain awards. Helaine lives in Toronto with her family. Visit her at www.helainebecker.com.

LIZ WONG was born in Honolulu, Hawaii, where she spent her early childhood painting and clambering about in mango trees. Winning the first-place trophy in her elementary school poster contest encouraged her to pursue art instead of a sensible career in finance like the rest of her family. Liz holds a BFA in art and a BA in anthropology from the University of Washington and currently resides in Edmonds, Washington, with her husband and son.

[A] fascinating read about a strong woman.

Other titles by Helaine Becker

How Wendy Sloboda Discovered a Dinosaur

We Wish You a Merry Christmas: A Canadian Carol

The Most Important Mathematician You've Never Heard Of

A Porcupine in a Pine Tree Collection

An Ant and Grasshopper Story

And Other Prehistoric Critters That Roamed the Planet