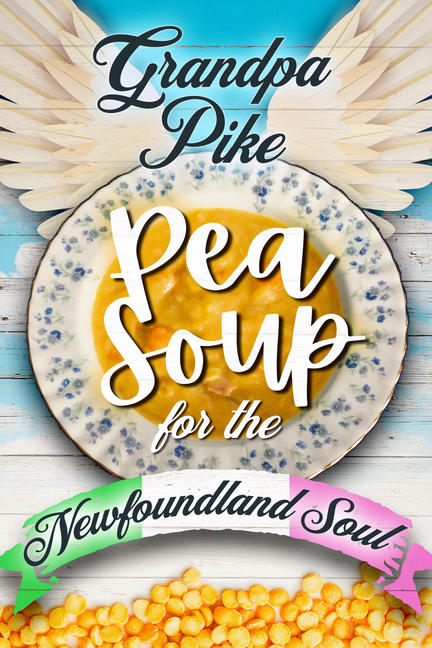 You won’t know what’s in Newfoundland pea soup until the host starts dishing it out. It may have bits of turnip, potato, carrot, ham bones, chunks of salt beef, or dumplings—along with split yellow peas. If unexpected guests arrive, simply add a bit more water. Grandpa Pike’s Pea Soup for the Newfoundland Soul is like that. “I guarantee you will find a good portion of ham,” says the author—his tongue planted firmly in his cheek.

These are short pieces—easy reads, suitable for reading while waiting for your flight, or after the kids are in bed and you finally have the bathroom to yourself, or while in a two-mile-long lineup for the Port aux Basques ferry during a three-day windstorm. Get comfortable, lean back, and then go hitchhiking with Grandpa in the 1960s, when he got a ride from a lady preacher, a trucker, and a guy in a red Corvette on his way to Mexico.

Read about his encounter with “the man from Glad,” his worst job interview, his failed attempt at a leveraged buyout of the Bank of Nova Scotia, and about the youngsters sitting at the kitchen table, looking out at the stormy night while waiting for that very last boat to come in through the Narrows—their dad’s.

You’ll laugh or cry, but you won’t be bored as Grandpa Pike rollicks his way through his wins and losses on topics as diverse as pets, religion, annoying people, the good old days, hockey, graduation, airport bars, lawyers, doctors, and the three scariest words to an old-fashioned man—scarier even than “hold my purse.”

Laurie Blackwood Pike, a.k.a. Grandpa Pike, was born in Stanhope, Newfoundland and Labrador. He is retired from his position as business development manager with a national chain of hardware and building supply stores. In 2017, he received the Estwing Gold Hammer Award—the industry’s recognition for his contributions. In 1986, he bought a rural general store, developed a logo, and branded the business “Grandpa Pike’s.” His unique store was profiled in the hardware industry’s Hardware Merchandising magazine. In recent years, Grandpa Pike has used his nickname for charity work. In 2007, he partnered with the Children’s Wish Foundation of Canada, Newfoundland & Labrador Chapter, to release a music CD. In 2009, he partnered with them again to produce a gospel Christmas CD. He is married to Kathleen Pike and has one daughter, Laurie Shannon. Grandpa Pike’s Number Two is his third book. His second, A Man of My Word, is the critically acclaimed biography of former premier Beaton Tulk. His first book, Grandpa Pike’s Outhouse Reader, has appeared in Atlantic Books Today’s bestsellers lists.

Other titles by Grandpa Pike