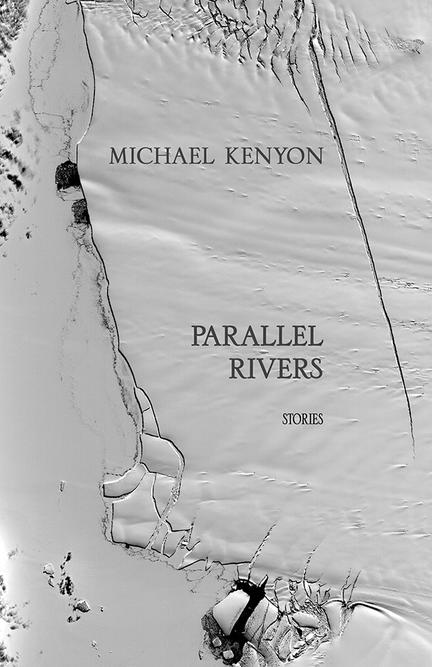 Parallel Rivers is a collection of stories that were coaxed into existence from Kenyon’s interest in seeing what fiction might learn from film, particularly the German, French, Italian, and Japanese cinema of the 70s. While Kenyon’s fictions are often immersed in postmodern sensibilities, adding the rituals and techniques and experiments of film to the process changes some of the ground rules. The collection has a particular structure: It has two sections that run stylistically parallel to each other. Its title Parallel Rivers applies to the two sections into which the collection is divided and also to the conscious and unconscious worlds that comprise our lives. The first section consists of short, often surreal or uncomfortable fictions; the second contains longer stories of larger, more realistic worlds. While characters and events are revealed in various heightened states of awareness, the techniques of the writing share a centre stage with them. In the shorter fictions, each story creates its own world order, and presents hyper-utilizations of point of view, time shifts, and disconnected physical detail. Here you will find stories like construction buddies who are violently transformed by their marriages; a cold war incident that causes a Canadian circus in Russia to fragment and disintegrate; a political runner at a Ravi Shanker concert who must cope with death and detachment; a surreal train that derails the purpose of a man dying and a woman questing while generating alternate realities for both. Kenyon’s worlds are not interrelated or easily recognizable, though the people and events are all familiar. The fictions exist as dreams exist, yet within this framework truth is revealed and the full play of language exercised. This kind of literary drama is fully revealed in “Theatrical Removals”. Here Kenyon reels off a causality loop that configures a girl, a boy, a Trans Am, a book, and a murder and nests “reality” in the idea that the events as they actually exist, are no different than the events as they may appear or might be imagined. In the longer pieces considerably more tradition and familiarity are used in each story’s creation. In the collection’s title story, “Parallel Rivers” one sister has emigrated, one has stayed; the unlikelihood of rivers running parallel sets the stage for the unexpected of how their lives have evolved. Then there’s the story “Jane Hart’s Airband” where the Tom Waitsian energy sweeps the reader along in a tale of music, quirky adventure and character conjecture. The narrator, Jane, whose struggle-is-real, controls the storytelling and builds reader confidence. But Jane’s hybrid monologue is more than a device, it is also a confirmation of a lifestyle choice that hoots and hollers for its authenticity and challenges the monologue’s familiar narrative conventions. That too could be said of the memory lament “That Time in Palm Springs” that closes out the collection. Gone is the anarchy and randomness that purpose the earlier shorter pieces. Here the speaker, a man caring for his ancient father, efficiently gathers his memories around him and recounts in a controlled reliability those moments that may have shaped him. In Kenyon’s fictions though, the concept of memory as in our narrator’s case may not be reliable nor may his life have been lived as he suggests, and his immersion in movies and television might create enough distrust that the reader can easily be left unsure.

Michael Kenyon was born in Sale, England, and has lived on the West Coast since 1967. He’s the author of eleven books of poetry and fiction. The Beautiful Children won the 2010 ReLit Award for best novel. Other work has been shortlisted for the ReLit Award, the Commonwealth Writers Prize, the SmithBooks/Books in Canada First Novel Award, the Baxter Hathaway Prize (Cornell) in fiction, The Malahat Review Novella Prize, Prism international’s fiction contest (won twice), the Journey Prize, and the National and Western Magazine Awards. He has adjudicated for the Banff Centre writing program, for the BC Arts Council, and for the Saskatchewan Arts Board. He has been employed as a seaman, a diver, and a taxi driver. Presently he works as a freelance editor and a therapist, and divides his week between Pender Island and Vancouver.

Other titles by Michael Kenyon

A Year At River Mountain