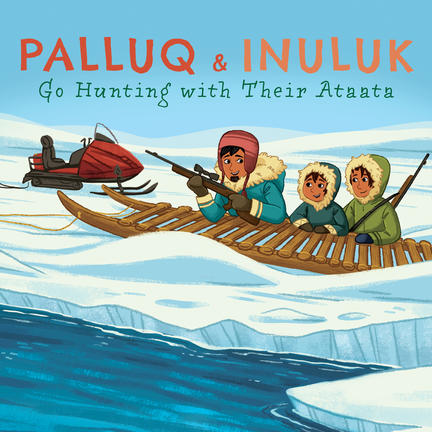 Palluq is going seal hunting with his older brother, Inuluk, and his ataata! They pack up their qamutiik and travel for hours to reach the floe edge. Will Palluq catch a seal to bring home to his anaana?

Jeela Palluq-Cloutier’s passion is to promote high quality standards of Inuktut in spelling, grammar, and usage. She obtained her Bachelor of Education in 1994 (McGill University) and Master of Education, with thesis, in 2014 (Prince Edward Island University). As a teacher, she taught Inuktut in elementary and high schools in Iqaluit and Igloolik, including post-secondary programs in Ottawa (Nunavut Sivuniksavut and Carleton University). She also worked for Pirurvik Centre, Inuit Tapiriit Kanatami, and Inuit Uqausinngik Taiguusiliuqtiit, where she led work on documenting traditional and modern terminology, developing language training programs and materials, localizing modern technology interfaces, and establishing reference materials on standard orthography, grammar, and affixes. She further contributes to the development of literature for children and adults in Inuktut through Inhabit Media/Education, including authoring her own children’s books to promote naming practices and family terms.

Michelle Simpson grew up in the woods of Niagara Falls, Ontario and still resides there today. She is a full-time freelance illustrator, focusing mainly on children's publications, and holds a BAA in illustration from Sheridan College. Michelle has worked as a concept artist at KeyFrame Animation for kids cartoons such as Ollie: The Boy Who Became What He Ate (Season 2) and Tee and Mo (Season 1). She is the author of Night Festival: A Silent Picture Book and Monsters In My House which was short-listed for the Canadian Self Publishing awards in 2014. Michelle has also illustrated Hanukkah Harvie vs. Santa Claus by David Michael Slater and Back Home by Shaista Kaba Fatehali. Michelle draws her inspiration for her artwork from nature, animals and folklore.

Things that make us laugh!

Other titles by Michelle Simpson

I Can See You

Talloqut: A Story from West Greenland