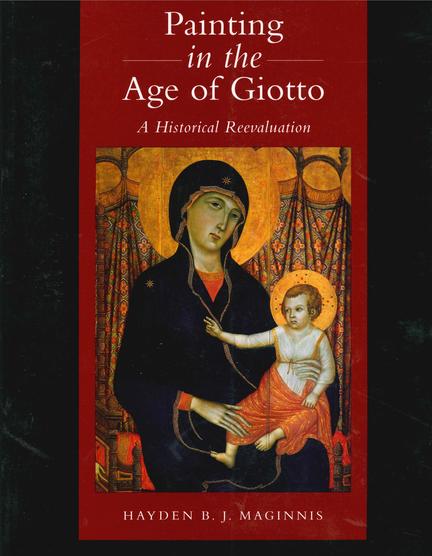 Painting in the Age of Giotto is a revisionist account of central Italian painting in the period 1260 to 1370. The study is the first to discuss Giorgio Vasari’s account of the "first age" of the Renaissance in his "Lives" and the character of the historiographical tradition that arose from that account. In opening the tradition to closer scrutiny, Hayden Maginnis explains the origins of many modern views regarding the period and the persistence of critical strategies and conventions that do not correspond to the historical realities.

Those realities are discussed in a return to the evidence of surviving works of art and in an exploration of stylistic trends that define regional currents in central Italian art. In an examination of the "new art" of the fourteenth century, Maginnis discovers not only that naturalism as an artistic ambition was remarkably short-lived but also that its chief exponents were the painters of Siena, rather than the painters of Florence. His detailed analysis of Giotto’s work demonstrates that his art belonged to quite another trend.

By the fourth decade of the Trecento, the character of central Italian painting was growing ever more diverse. Painters quite consciously began to explore artistic alternatives to naturalism, thereby introducing "notable disturbances in the classification of Tuscan Trecento painting" and providing a foundation for developments toward the mid-century. Through a reexamination of the historical and art-historical evidence related to painting immediately after the plague of 1348, Maginnis demonstrates that the central thesis of Millard Meiss's brilliant Painting in Florence and Siena after the Black Death, until now the standard interpretation of this period, is untenable, and offers a new interpretation of painting at mid-century.

Hayden B. J. Maginnis is Professor of Art History at McMaster University. His previous book, Painting in the Age of Giotto, was published by Penn State Press in 1997. His articles have appeared in The Burlington Magazine, Gazette des Beaux-Arts, Art History, Source, and Art Bulletin.

“A great work, Maginnis’s book will be an enduring monument of scholarship. It is uncommonly ambitious, synthetic, and revisionary: one of the few truly significant contributions to the understanding of Italian Renaissance art in our generation.”

“This is the most significant treatment of the art of the period since Millard Meiss’s groundbreaking Painting in Florence and Siena after the Black Death. Not only is it a methodologically timely and critically perceptive meditation on the reception of Trecento Tuscan painting, but it is majestic in its sweep and bold in its ideas.”

“The most deeply pondered account of Trecento painting to have been published for many years.”

“Hayden Maginnis has produced a steady stream of articles on fourteenth-century painting in Italy during the last twenty years that have earned him a reputation as one of the leading scholars of the Trecento in the world. This book is a synthesis that moves far beyond his previous scholarship. It is also a beacon for Renaissance scholars and will encourage them to take a fresh look at painting in Tuscany during the great period of Dante, Giotto, Duccio, Boccaccio, and Petrarch. All of this adds up to an exciting, fresh view of the early Renaissance, which should create new interest in this important field. Painting in the Age of Giotto is a pleasure to read.”

“Provoked by the chasm between what we now know and can see and the baggage of inherited interpretation, Maginnis outlines a new history of the Tuscan Trecento. The result is a consistently thought-provoking book, conservative in the best sense, aiming deliberately and often successfully to provide new and more compelling reasons for old convictions. . . . This is indubitably an important book and a very valuable contribution to an overdue reassessment of one of the seminal periods on Western art.”

Other titles by Hayden B.J. Maginnis

The World of the Early Sienese Painter