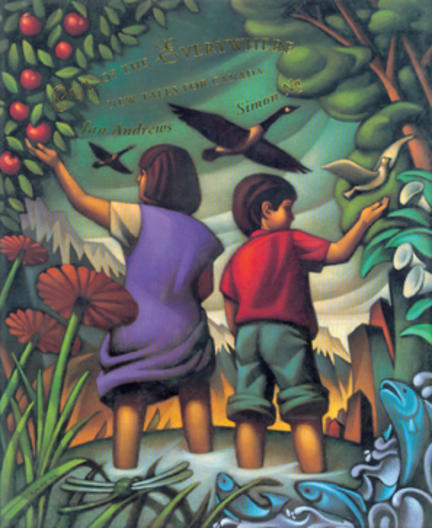 Jan Andrews lives at the end of the road on a lake in Eastern Ontario. The plants and creatures in her Orca book The Twelve Days of Summer can all be found in her backyard. She has a love for the Canadian wilderness and, when not writing, can often be found canoeing, cross-country skiing, hiking or rock climbing, depending on the season. Jan has been part of the world of Canadian children's literature for thirty years and more. Her titles include such classic picture books as Very Last First Time and The Auction. She has contributed to the Dear Canada series through her book Winter of Peril.

An accomplished storyteller with a passionate concern for oral traditions, she has produced the folktale collection Out of the Everywhere. New Tales for Canada and set down the true story of Pa's Harvest as heard from another teller. She has a new book coming out in 2007 entitled The Stories at the Door—a work of rollicking fun and humour. Jan loves to do school visits and is prepared to travel widely to remote and urban locations. She gives teacher workshops and does conference presentations. Her specialty is letting her listeners know how much she cares about them.

She is the Artistic Director for two storytelling series and the Director of Storysave, a project for recording elders from the Canadian storytelling community for CDs and audio website. Somehow, with all of this, Jan has never quite managed to get her own website organized - although she keeps trying! She can, however, be reached at jandrews@magma.ca.

Simon Ng was born in Brunei and immigrated to Toronto as a teenager. His illustrations have appeared in many North American newspapers and magazines, including the Boston Globe and the New York Times Magazine. His books include Out of the Everywhere: Tales for a New World by Jan Andrews and Tales from Gold Mountain by Paul Yee, which has been named a Bulletin Blue Ribbon Book and the Parent's Choice Honor Book as well as winning the Violet Downey Book Award and the Sheila A. Egoff Children's Book Prize. Simon Ng lives in Toronto.

The high production quality of this book and its variety of well-told tales makes this a worthy addition to any folklore collection.

The characters are memorable and the lessons they learn are valuable.

With its strong plots and pithy content, this is an excellent storybook for 6 to 10 year olds.

...the stories are poignant and filled with wisdom.

The narratives are swift and taut and occasionally wink playfully at the reader.

Other titles by Jan Andrews

When the Wind Came

To See The Stars

The Silent Summer of Kyle McGinley

125 Years of the World's Biggest Bonspiel

The Twelve Days of Summer

Other titles by Simon Ng