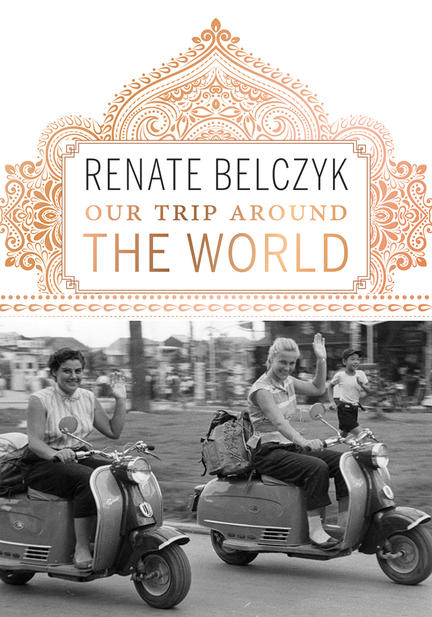 A spirited 1950s travelogue that takes the reader around the world during a time when two independent young women travelling alone was considered almost revolutionary.

Renate Belczyk was born in Dresden, Germany, in 1932. When she was three years old her family moved to Berlin, where they settled into a small apartment building on the outskirts of the city. It was in this building that she met another adventurous girl, Sigrid, with whom she would travel around the world as young women after the Second World War.

Having spent most of their childhood and teenage years climbing trees, swimming, cycling, hiking, and adventuring around Germany the two young women attended a talk by the German writer Heinrich Böll. During his presentation the renowned author suggested to the crowd that they all travel to different countries and make friends with the locals whenever they could, as this would help prevent another war. Renate and Sigrid took this advice to heart, and from that point their adventures together took flight.

Starting in 1955 and travelling for three years to England, France, Spain, Portugal, Mexico, Canada, Japan, India, Nepal, Bhutan, Egypt, Turkey, Macedonia, and Greece, their adventures together culminated with their joint return to Germany in 1958. In 1959 Renate returned to the Canadian Rockies to work in the backcountry, and in 1960 she married mountaineer Felix Belczyk and settled in Castlegar, BC, where they raised three children.

Our Trip Around the World is an endearing snapshot of the postwar era when adventure travel – mountaineering, hiking, hitchhiking, and cycling – was enticing those with adventurous spirits to experience the world like never before.

Renate Belczyk was 27 when she moved to Canada from Germany in 1959. Over the years she has spent a great deal of time adventuring in the backcountry of the Canadian Rockies and Columbian mountains, where she’s worked as a ski camp cook and kindergarten teacher. During the past 50 years she has visited Peru, Pakistan, Tibet, China, Vietnam, Laos, Cambodia, Mongolia, Bhutan, Syria, Jordan, New Zealand, Ecuador, Zimbabwe, South Africa, Russia, and all of Europe. She has paddled the Amazon River, canoed the Mackenzie from Inuvik to Tuktoyaktuk, and walked around Mount Kailash in Tibet. Now in her 80s, she lives in Castlegar, British Columbia.

"Renate Belczyk's account of her travels around the world with her childhood friend Sigrid is nothing short of remarkable. The world may have changed since the 1950s, but Our Trip Around the World demonstrates that perhaps if we all embodied Belczyk's pure thirst for adventure and her openness to connect with strangers, we might experience the world the way she once did." —Meghan J. Ward, outdoor, travel and adventure writer

"The story of two women travelling alone, in a period when that was rarely done, opened up a crazy amount of experiences and even though those adventures intrigued the reporters who followed them, I don't believe Renate or Sigrid realized just how cool they were. It's about time this book came out." —Katrina Rosen, author of With You By Bike: One Couple's Life-Changing Journey Around the World