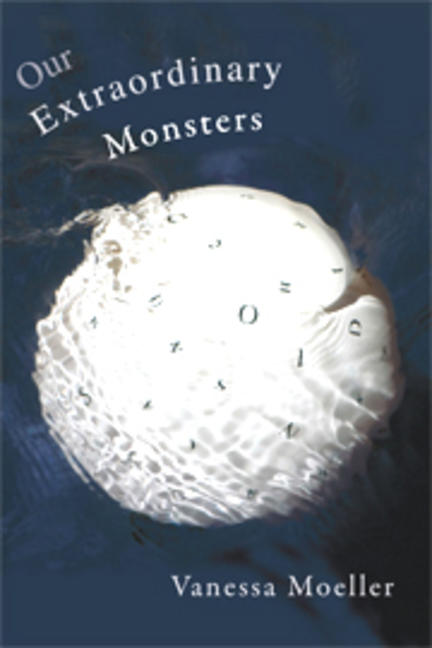 Our Extraordinary Monsters is Vanessa Moeller's debut poetry collection which uses language(s) to build a written architecture where meaning(s) reside(s). The work resembles M.C. Escher's lithographs of impossible spaces but ones created from language and memories where investigations of self, identity and voice occur, where dichotomies exist and where correspondences are created, sent, delivered and read. Within this imaginary space Moeller explores her constantly shifting identity as a poet, as a woman, as a second-generation German-Canadian immigrant to Atlantic Canada. There is constant negotiation where the "I" becomes a filter through which experiences are sifted, molded, changed, archived, restructured and re-imagined onto the page with language(s).

Vanessa Moeller's poems and short stories have appeared in numerous periodicals including The Fiddlehead, Prism International, The Antigonish Review, CV2, The Pottersfield Portfolio and Qwerty and have won several awards including the W.F.N.S's 2002 Atlantic Poetry Prize. She completed her MA in creative writing at the University of New Brunswick. She now lives in Fredericton, New Brunswick.

That night the gecko became a half-moon scar asleep against the white ceiling. The balcony door was open even though the rain tapered from the sky, the thick green leaves suddenly the skin of drums, heavy with rhythm. The air lifted the fly-netting from my back as I dreamt of dissolving into this earth, my hair transformed into curling trellises that flower into brilliant panicles of bloom. I placed my mouth against the interior skin of forearm and could still taste the ocean, the same ocean I fought all summer who, like a deranged lover, had washed me up against the volcanic cliffs until my legs were etched with wounds, permanent petroglyphs of this journey. I finally gave up trying to write descriptions in letters, instead allowed lizards to crawl across the paper, transcribe the script onto their pale bellies and carry it into the shade of the orange flame vine beneath the Chinese cracker flower. Words became impotent in the heat and I grew to understand the cool understated prose of silence. That last night each moment was an opening of pores, of tiny doorways; a sensuous translation into a language in which I would never truly be fluent.

The Keening of Icebergs

Geophysicists say it’s like something from a horror film — each iceberg weeps its own lament when crevasses inside flow with water and set its walls vibrating. But what is meant by these keenings? This is the sound of ice sundered — like oak bending to break, like the tones of an abject viola found in the calloused fingers that pluck a string ready to snap, like a voice reduced to rasp when words like love or tomorrow scrape the throat, corrugate the tongue. To ask what is meant is to wonder about the shape of an hour, how to fit the body to its frame, how a husk of prayer can encase a name.

After a letter from Katia Grubisic A decade later, as a woman, I stood on Langestraße and tipped back my umbrella to reassure myself of the truth of rain on my eyelids. I wrapped the sensation around myself as one would a coat that bears the cologne of someone passed. I sheltered under the canopy of a street vendor, chose a pomegranate and held it to my lips, inhaled, vermilion staining my tongue. Words saccharine, gritty, clotted my mouth and left me unable to explain to the man arranging pears "I want this one" or "I wish the rain would end." This city is not my home but my mother’s. It bears down with brick and traffic, and it contains half my language halb meiner Sprache, halb meiner Stimme. The other half arrives in creased envelopes with your handwriting that stretches a thousand miles of distance taut, your words explaining how, at the All-You-Can-Eat Breakfast Buffet, you wrote me this letter on the back of a placemat , its left corner greased from stray scrambled egg, a stain I can’t help touch as I read the line: I saw wild horses and thought of you.

“ As a rule, readers should be very wary of poems with titles that offer two nouns linked with the word "of " -- for instance, "The Topography of Love" or "The Ontology of Solitude." This device is usually a warning that what follows will range from blandly familiar to comically overwrought. In Our Extraordinary Monsters, Vanessa Moeller commits this titular transgression not once but 10 times, with each of the 10 poems that make up the first section the book. It comes as a welcome surprise that these openers (among them, "The Hydrography of Memory" and "The Archeology of Air") do not share their titles' facility.

They do, however, possess an almost conversational casualness: to Moeller's credit, the reader may not immediately realize that these seemingly effortless poems are, in fact, rhyming sonnets. The next section is far freer in form, with crisper lines — "I cannot confine marzipan's cloying melt" — though the unfortunate titles persist ("Evanescent List," "Linguistic Obituary"). Some of the poems read as though they have been translated from another language and, indeed, on reaching the book's third section the reader finds that each poem appears twice, first in English and then, on the facing page, in German. With little indication of which is the original and which the translation, it is tempting to imagine Moeller writing in both languages, going back and forth between English and German as it suits her, as the book invites the reader to do.

Other people's words, and words addressed to others, occupy a central position in Our Extraordinary Monsters. The book is cluttered with epigraphs — at least one for each of its sections (in the second section, one for nearly every poem) — and unified by an epistolary impulse. Moeller writes German poems based on letters written four decades earlier by her father (English translations of which are included in an appendix), and then responds to them with her own letter-poems. She also, in what is perhaps the book's most luminous sequence, presents fragments of letters written from 10 of Italo Calvino's invisible cities. Though the seven sections occasionally read like excerpts from separate books, Our Extraordinary Monsters is nonetheless a superb demonstration of Moeller's creative breadth. ”