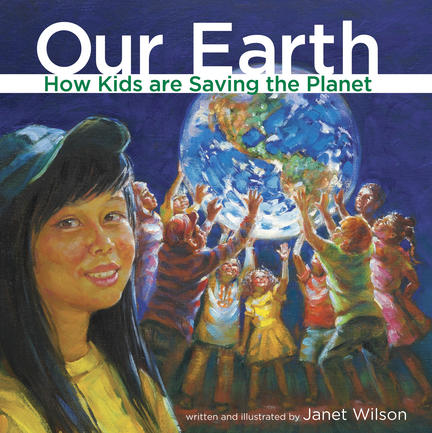 Ten profiles of amazing young environmental activists. Each child is captured in a portrait, their achievements described, and filled out with photos. Ends with tips for kids to make a difference.

Janet Wilson is an award-winning artist and a published author, holding over 50 publishing copyrights in the children's literature field. She graduated with honours from the Ontario College of Art and Design as a mature student, the mother of two little boys. Janet's love of books combined with a particular talent for drawing children has brought her into the world of "kidlit." Her more realistic style lends itself to interpreting the stories of children's favorite authors in producing picture books. Sensitivity to the nuances of facial expressions helps young readers grasp subjects ranging from dealing with death, the arrival of a new baby, the tragedy of war or just wishing your new dress was a different colour. Her awards include Best Illustrated Book in the United States in 2004 for Jasper's Day, Canadian Information Book of the Year for her artwork in In Flanders Fields, and she is the first non-native artist to be awarded the Native Reading Week Award for her illustrations in Solomon's Tree. Janet is a career artist known for her fine art commissioned portraits and still life paintings.

Our Earth: How Kids are Saving the Planet

Talented author / illustrator Janet Wilson has also created a title that successfully marries art and text as she did in the beautiful One Peace: Stories of Young Activists (Orca Book Publishers), her first book in this field. Through Second Story Press, Wilson now shouts out the stories of young environmental activists in Our Earth: How Kids are Saving the Planet. Readers will feel empowered as they read about ten children aged seven to 17: Ryan Hreljac, whose Ryan’s Well Foundation provides drinking water in 16 countries and Kruti Parekh, whose magic shows raise environmental awareness in India and elsewhere. A full “How You Can Help Save the Planet” section gives more ideas and examples to fan the spark of interest into a flame of action. As with The Good Garden, a world map would have been helpful.

Wilson’s writing is short and to the point, as it should be for this age group. In this non-fiction book, careful editing would have helped clarify the statement “children in poor countries, such as in Africa” to ensure Africa is understood as a continent rather than a country. Similarly, editing might have toned down or factually supported the declaration that watching electronic media “increases the likelihood of attention-deficit disorder, obesity, stress, impaired social skills, asthma, and poorer school performance.” Of special note is her inclusion of the work of young artists — bright fun! Wilson’s blazing passion and hopefulness, and the stories of her truly amazing subjects, will undoubtedly inspire readers of Our Earth.

Our Earth: How Kids are Saving the Planet

Meet ten exciting young environmental activists from around the world. Through their efforts to construct windmills to create power, save the rainforest and its animals and build wells in Africa, these children show us that we are all capable of bringing about change. The spirit of each child is captured in a beautiful portrait, their accomplishments are described, and tips on what kids can do to help the environment are included throughout.

Other titles by Janet Wilson

How Kids are Taking Action

The Story of the Poem by John McCrae

How Kids Are Making a Difference

Severn and the Day She Silenced the World

How kids are changing the world

Shannen and the Dream for a School