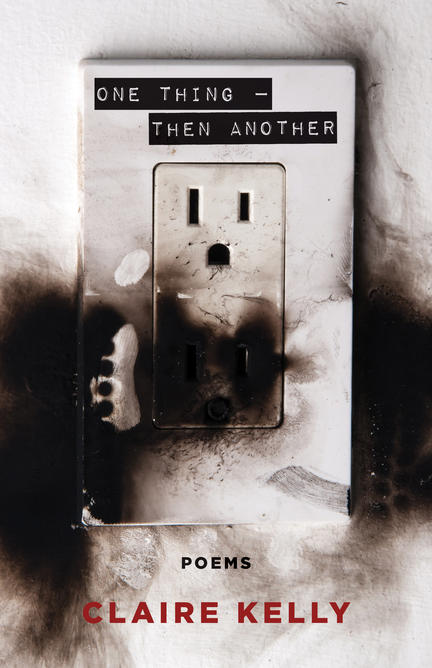 A poetic response to the tumult of a move across country

One Thing — Then Another is a collection of poetry divided into three unique sections: “East” explores the constraints of living under the poverty line in a have-not province. “And” is a long poem about moving in a U-Haul across the prairies during an ice storm. “West” considers what it means to live in the have-est of have provinces and trying to acclimate to that alongside an ever-present drought.

The poems are largely about contrast: east to west, flood to aridity, poverty to comfort, small town to city. Throughout this accessible, smart, and funny collection, there are many descriptions of apocalyptic upheaval to reflect the feelings of disruption that often accompany relocation.

Claire Kelly's work has been published in various literary journals, including The Malahat Review, Exile Quarterly, Event, and Prism International. Her chapbook, Ur-Moth, was published in 2016 by Frog Hollow Press. Maunder is her first full-length collection. She lives and writes in Edmonton, Alberta.

“It takes the wit of a Claire Kelly to coin the term ‘un-talisman.’ That’s what a poem might be in the twenty-first century — it has no magical powers, won’t offer false hope, but when fashioned by the likes of Kelly, it offers a kind of eyes-wide-open solace: carry these un-talismans with you and watch the abject clutter of the ‘post-pre-post-apocalyptic’ era shine in their presence.” — Sue Sinclair, author of Heaven’s Thieves

“Claire Kelly’s sophomore collection is millennial in the best possible way — witty, transient, both ironically and sincerely nostalgic, and deeply wary of the status quo. A friend’s Facebook post is capable of making the world more magical, a trans-Canada move is infused with all the tragedy of Wuthering Heights, and the gods drive jalopies and eat marshmallows. With her masterful ear and keen eye for connections, Kelly blends vernaculars into a playful and singular voice. This is an excellent collection.” — Kayla Czaga, author of Dunk Tank and For Your Safety Please Hold On

“Humourous, wry, homesick, filled with nuances not apparent on a first-read, One Thing – Then Another captures contrast—small town to city, ocean to prairie, what was, to what is.” — Laurie Mackie’s blog

“In a tone reminiscent of Solie’s snappy urban allusiveness, Kelly sends us from the poverties of one province, through a U-hauled ice storm and into the supposed riches of another, despite the inevitable droughts . . . Kelly has a knack for carving the breath between lines and jabbing jiving rhythms at the reader.” — Marrow Reviews blog

“There was simply no way for me to resist Claire Kelly's collection, One Thing — Then Another . . . There are nifty cultural references . . . which I'm always a sucker for, but it still all comes down to language. Kelly has some fantastic lines.” — Malcolm Avenue Review blog

Other titles by Claire Kelly