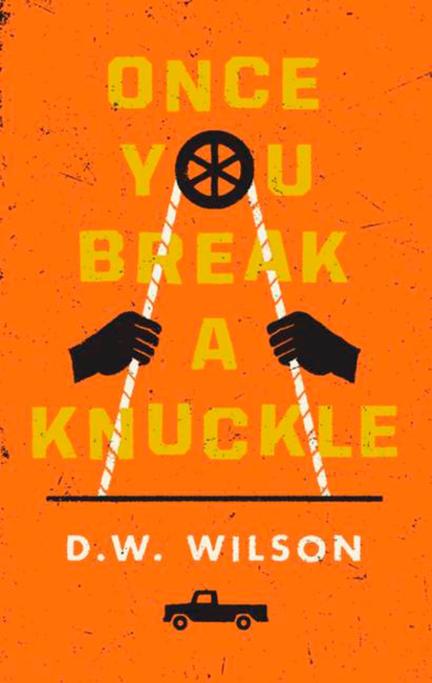 Set in the remote Kootenay Valley in western Canada, Once You Break a Knuckle tells stories of good people doing bad things: two bullied adolescents sabotage a rope swing, resulting in another boy’s death; a heartbroken young man refuses to warn his best friend about an approaching car; sons challenge fathers and break taboos. Crackling with tension and propelled by jagged, cutting dialogue, the stories interconnect and reveal to us how our best intentions are doomed to fail or injure, how our loves can fall short or mislead us, how even friendship–especially friendship–can be something dangerously temporary.

Wilson’s world is always dangerous, barbed with violence and the possibility of betrayal. And yet, in this small, finely-wrought universe, a dogged, wry dignity is usually enough to see us through.

An intoxicating alloy of adrenaline and the kind of vulnerability we would all admit to if we were honest, Once You Break a Knuckle is about the courage it takes just to make it through the day.

D.W. Wilson is the author of Once You Break A Knuckle, a collection of short stories. He was shortlisted for the CBC Short Story Prize and the Ethel Wilson Fiction Prize. Wilson is the recipient of the University of East Anglia’s inaugural Man Booker Prize Scholarship and the Dean’s Postgraduate Studentship. Born and raised in B.C., he is now a Ph.D. candidate in creative and critical writing at the University of East Anglia. He lives in Cambridge, UK.

“Robust, musical, slyly funny, and shining a fearless light into the yearning male heart, these powerful stories should be required reading for any curious females of the species.” - Bill Gaston

“There are indeed echoes of Richard Ford and Raymond Carver here … Wilson’s description and dialogue … attain the same lean, elemental punch, a total and exhilarating exclusion of the extraneous.” - The Globe and Mail

“Wilson writes with admirable yet inventive economy about the tough place where he grew up.” - Vancouver Sun

“D. W. Wilson’s ‘Dead Roads’ was the stand-out winner of the 2011 BBC Short Story Award. My worry was that it might also be the stand-out story in this debut collection, but no—the standard is consistently, astonishingly high throughout. There are echoes of Wells Tower and Russell Banks, but Wilson’s voice is distinctive, confident and completely enthralling.” - Geoff Dyer

“I say this through gritted teeth, but D. W. Wilson’s stories have a wonderfully raw, vernacular energy which carries the reader through some dark and spitefully funny moments. This is a cracking read, damn him.” - Jon McGregor

Other titles by D.W. Wilson

Short Stories as Selected by a Crack Team