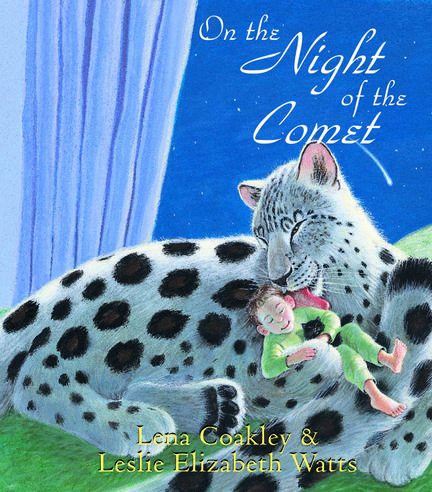 On the night of the comet, when cats can talk, three large cats stop by Peterís house on their way to the mountains to ask the Great Cat their questions. The plants in Peterís parentsí room are dead. His father sleeps on the couch. And Peter is very, very sad. With her tail long enough to wrap Peter up from head to toe, the great white snow leopard tries to help. She may not be able to answer Peterís questions, but perhaps she can give him a way to say goodbye.

Lena Coakley was born near the beach in Milford Connecticut, and she still loves the ocean. Her family tree is crowded with English professors, and the grandmother who raised her founded and directed a cooperative nursery school. How could she help but love children's books?

She studied writing at Sarah Lawrence College in New York and writing for children with Peter Carver in Toronto, Canada. Her first picture book, On the Night of the Comet, was published in 2004, followed closely by Mrs Goodhearth and the Gargoyle in 2005. She has twice won second prize in the Sunday Star Short Story Contest.

Lena is available for school and library visits across Canada and the US. Her website is www.lenacoakley.com.

Leslie Elizabeth Watts has illustrated a number of acclaimed picture books, including It's Raining, It's Pouring, and On the Night of the Comet. Leslie works in egg tempera, an old technique that requires the mixing of dry pigments with egg yolk and water. She lives in Harriston, Ontario, with her daughter Emily, her son Stefan, and several pets.

"The artwork . . . is so real, so magical, so gentle, so evocative of loss and of understanding. It is a very special book."

"The pictures are beautiful and the story is wonderfully comforting and humorous."

"For a child facing a loss, this book could be a great help."

". . . a comforting story in which a sad boy finds, through the fantasy cat, his own way of accepting the changes in his family."

". . . a haunting and touching look at a little boy searching for answers where there are none."

Other titles by Lena Coakley

Worlds Of Ink And Shadow

Mrs. Goodhearth and the Gargoyle

Other titles by Leslie Elizabeth Watts

You Can't Rush a Cat

It's Raining, It's Pouring