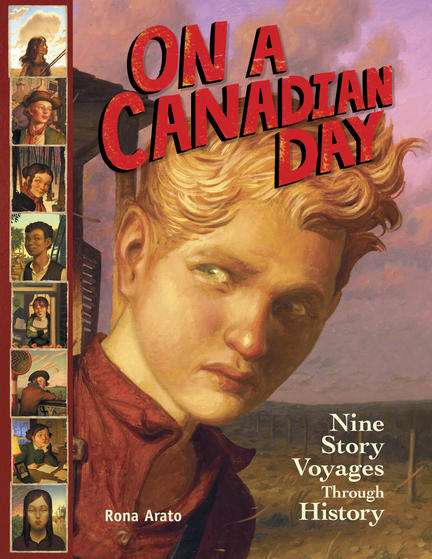 What better way for a young reader to truly understand another time than to get an intimate look at the daily life of another child? In On a Canadian Day, part of the On a Day Story Voyages series, Rona Arato introduces nine engaging fictional characters, and through their stories situates young readers perfectly in pivotal moments in Canadian history. Each chapter opens with a fictionalized account of a morning, afternoon, and evening in a child’s day in a different time period. These stories open up a window onto places and times vastly different in so many ways from a modern child’s world — yet with many familiar emotions, too. The book begins with the story of an Aboriginal boy on the Great Plains in 1680 as he prepares for his first buffalo hunt. From there, readers will learn about a pioneer girl’s day sugaring off and then read a boy's story about fleeing to Canada via the Underground Railroad, and more. Every riveting story is woven throughout with myriad, rich details of daily life — eating, dressing, transportation, living arrangements, and, of course, the expectations and experiences of childhood in different times. Following each story is a photo essay that explores the era through archival images from the period. Through these stories from across time and across the land, a complex and fascinating portrait of a nation emerges.

PETER FERGUSON has been illustrating books for nine years. His art appears on the covers of many children’s books including The Sisters Grimm series. Originally from Montreal, he lives with his wife in Tokyo, Japan.

The information about each time period will appeal to young readers as the stories give the sense of a real child living a much different life than that of most modern children. Recommended.

This anthology of historical short stories would make excellent read-aloud material for Social Studies lessons or an interesting book to put into the hands of young history buffs...The author skillfully weaves a wealth of historical information into each story, painting a detailed picture of daily life and the social context of the time.

On a Canadian Day is a wonderful assortment of pre-adolescent's life experiences that are vividly described and illustrated in this authentically framed and researched collection.

The diversity and time span these stories cover paints an interesting portrait of Canadian history.

The Story of Josiah Henson

Other titles by Peter Ferguson

Memories of a Cuban Boyhood