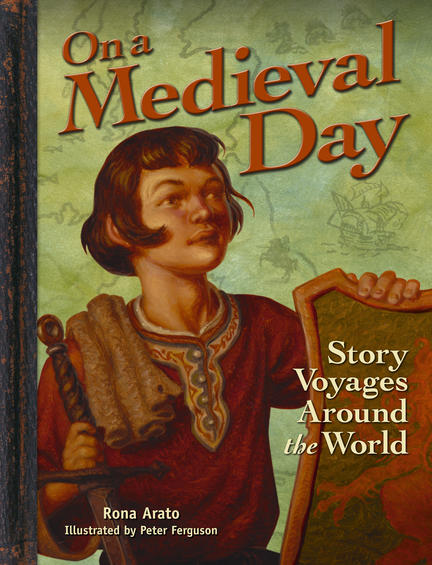 What if you could spend a day in the shoes of a child in the middle ages? What would you learn about cultures of the past? On A Medieval Day, part of the On a Day Story Voyages series, uses nine exceptional pieces of historical fiction to give kids just that opportunity. Contrary to the commonly Euro-centric associations of the word “medieval,” On A Medieval Day visits cultures from Japan to Mali and spans nearly 800 years of world history. From Viking explorers and religious persecution in Spain, to medical advances in Baghdad and early ball sports in the Mayan Empire, this book challenges assumptions and enlightens young readers to the complex and fascinating civilizations that have all shaped our world. Told through the eyes of boys and girls aged 12 to 14, kids are able to follow each character through a single day. These stories are further expressed through the commanding portraits painted by artist Peter Ferguson. Each story is further augmented by detailed background pages that use facts, maps and illustrations to bring readers further into this history.

PETER FERGUSON has been illustrating books for nine years. His art appears on the covers of many children’s books including The Sisters Grimm series. Originally from Montreal, he lives with his wife in Tokyo, Japan.

By covering medieval times outside Europe, this book is a welcome addition to the wealth of books about the Middle Ages.

Arato's shifting points of view, gender and cultural sensitivity within each chapter, not only provides a good introduction to these countries, but a compassionate story as well...[On a Medieval Day] will inspire an appreciation for the diversity of culture, politics and spiritual traditions of this period.

I applaud Arato's compilation of varied stories...a refreshing and unique approach that will interest young readers.

The collection may pique readers' interest in finding out more about some of this realms and eras.

Stunning paintings illustrate each chapter and youthful figures provide an instant empathic connection and invitation to contrast life in medieval times to an adolescent's life today.

A gorgeous book to be savored, read aloud, and enjoyed repeatedly.

The fast-paced stories make for entertaining reading…a wonderful attempt to expand the usual concept of the medieval world beyond Europe.

Arato’s stories provide readers with interesting and unique perspectives on a period of history which is usually described in terms of knights, squires, monks and peasants…a good resource for social studies classes.

On a Medieval Day: Story Voyages Around the World

Children’s books on the Middle Ages, traditionally focus on idealized and romantic notions about English and French nobility, ignoring the period’s complex religious, cultural and social diversity. By expanding the definition of this period to include countries from the world, Rona Arato’s On a Medieval Day: Story Voyages Around the World, departs from the norm and offers kids new and exciting perspectives on the Medieval World.

From a popular sporting event of the ancient Mayans to the precarious situation of the conversos in Medieval Spain, Arato’s combination of historical fiction and fact provide a structure and context for each chapter. Each section begins with a short story of the day in the life of a young adult whose life is about to change in a significant way. Although there are some anachronisms in dialogue and character motivations, Arato’s shifting points of view, gender and cultural sensitivity within each chapter, not only provides a good introduction to these countries, but a compassionate story as well.

The two-page fact sheet at the end of each section has some nice touches; including a map comparing where the story took place and its modern geographical location, and four points that references back to something that happened in the story.

On a Medieval Day is excellent for classroom study and discussion and for students interested in history, as it will inspire an appreciation for the diversity of culture, politics and spiritual traditions of this period.

The Story of Josiah Henson

Other titles by Peter Ferguson

Memories of a Cuban Boyhood