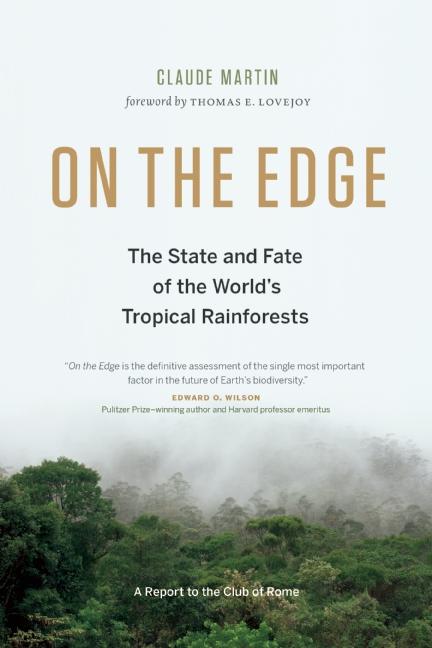 The definitive assessment of the single most important factor in the future of Earth’s biodiversity.,/b>—Edward O. Wilson, university research professor emeritus, Harvard University.Approximately half of the world’s tropical rainforests remain intact. Will our actions over the next decades conserve or destroy what’s left? The most important book about tropical rainforests in 50 years.

In the 1970s, the global community was rocked by reports documenting the deforestation of tropical rainforests, and conservation became the rallying cry of the day. On the Edge examines what has happened, both good and bad, in the decades since. Tropical rainforests are not just massive repositories of biodiversity: everyone on the planet relies on this essential ecosystem for fresh water, clean air, and climate regulation. And yet, urbanization and the worldwide demand for food and biofuels still drive deforestation, and climate change threatens to start a feedback cycle that could make the rainforest a carbon source. With contributions from environmental luminaries Jürgen Blaser, Bruce Cabarle, Chris Elliott, David Kaimowitz, Claudio Maretti, Ralph Ridder, Jeffrey Sayer, and Rodney Taylor, On the Edge takes a close look at deforestation and reforestation throughout the world and finds hope in success stories that guide us toward conservation.

Claude Martin worked as a field biologist in India and parks director in Ghana before becoming the director of WWF International and an advisor to various conservation organizations. He completed his PhD thesis in ecology at the University of Zurich, and currently serves as Chancellor of the International University in Geneva. He lives in Arzier, near Geneva, Switzerland.

Thomas E. Lovejoy is a senior fellow at the United Nations Foundation and Professor in the Environmental Science and Policy department at George Mason University. Since 2009, he has served on the Board of Directors for the Amazon Conservation Association.

"An impassioned argument backed by scientific data that is geared toward an educated general readership. Anyone interested in the fate of the rainforests—and the world—should check it out." —Publishers Weekly

Other titles by Claude Martin

Home-Based Care, the Elderly, the Family, and the Welfare State

Other titles by Thomas E. Lovejoy

The Future of Sustainability Education at North American Universities