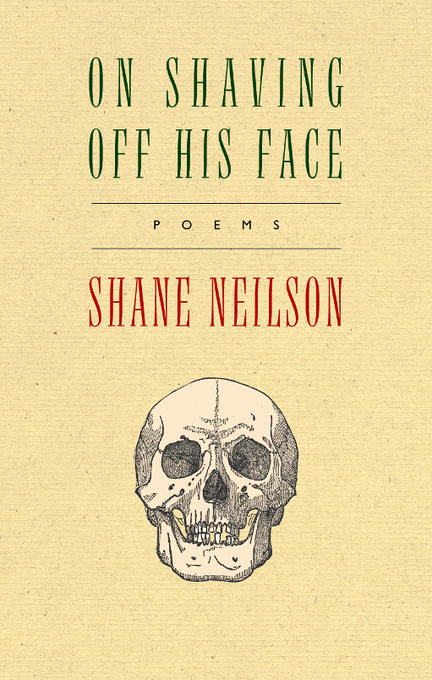 Shane Neilson's latest collection of poetry draws on the image of the human face to explore themes of pain, grief and illness both physical and mental.

Shane Neilson is a family physician who published his first trade book of poems, Meniscus, with Biblioasis in 2009. In addition to several collections of poetry, Neilson has published in the genre of memoir, short fiction, biography and literary criticism, and his work has been widely anthologized in poetry, nonfiction, and medical journals. In his medical doctor and writing practices, he focuses on mental illness, pain, and disability. He currently acts as editor for Victoria, B.C. publisher Frog Hollow Press. Though he currently lives in Oakville, Ontario, all of his work is rooted in rural New Brunswick.

Excerpt: On Shaving Off His Face (by (author) Shane Neilson)

Emblem: we spent an automatism, the sway-backed Moro response reflecting a Landau reaction, patching rotten insides with deviations from this rule.

Waste from the modes of stimulation; the differential fixation a hazard until we laid the lalling stage so that a normal person as abstraction could walk it; and we were a kind of crossmodal,

which parents come to understand. The day idioglossing us over, except when Lennox Gastaut's up on the scaffold, making repair after repair to form the multiplex of Friedreich. Crows, living

in the opisthotonic, hands pronated as hammers, redolent with their Lafora-type shit,
in the barn-shade for quick snorts and AED availability. If asked, violaceous faces would complain of spike-and-wave wages and work harder if my father was found.

Sometimes the prognosis is bad. The sun would heat the hyperexcitable tin and burn though the work gloves. With panoramic vision, a young woman jamais entendu, I thought

of each time I carried a piece of tin up the grand petit absence, just fifteen, interictal on the wood underneath, battle hymns of the benign rolandic, places where

it was distinguishable from premonition if fire or lightning had hit. We papered it over. A jacksonian trick for the men to work past a certain drink

and I remember looking at the old barn, house of vibratory quality: hay and a beaten-down epileptic cry that grew monstrous in the year,

at three in the afternoon, no men around, a wife in fencer's posture soon to be cut
and the gleaming parachute reaction, a drop attack.

Imaginative, inventive, and dynamic, On Shaving Off His Face is meaty poetry, a substantial work.

There's an ominous-looking skull on the cover of Shane Neilson's On Shaving Off His Face, and it's a clear indicator that what lies within is not for the fainthearted. The collection is divided into three "books," each capable of being read as a stand-alone or as part of a whole.

Neilson's dense lines are held together by his expert use of rhyme, repetition, and alliteration. The result is a unique signature style: "Summer and the wave. Summer and the grave, grace of grim / stones washed blank from salt water off the coast of Maine / and its nested coastlines of eyes."

The title poem of Book Three, "Out of the Mouth of Babes and Sucklings Hast Thou Ordained Strength," pushes the limits of what might be strictly considered poetry, with its four pages dominated not by verses, but by footnotes to verses. In "The Barn," Neilson gracefully mixes in unusual vocabulary, with a nod to his medical background as a family physician?"idioglossing," "opisthotonic," "violaceous," "rolandic"?aiding his intent by offering a different way of looking at the familiar. These are not words chosen or used as strictly diagnostic terms?they serve the poem in their mouth-feel and in their strange, obscure beauty.

Though the collection is strong throughout, the standout is Book Two, which bears the disarming title "Able Physiologists Discuss Grief Musculatures." Based on a fictional conference of students of Darwin's Theory of Fervourism, Neilson introduces a series of diverse characters in fourteen parts, among them such notable figures as Al Capone and Edvard Munch. A few medical photographs illustrate Neilson's topics, but nothing can prepare readers for the modern-day mug shots and raw, resonant poetic profiles of three all-too-real perpetrators of recent mass killings. Carrying the theme of the body, and particularly the face, as a literal window into the psyche, this section, along with the first and third, probes deeply into mental, physical, and emotional illnesses.

This collection could be regarded as an extension of the medical or scientific approach to knowledge, with its subject the innermost workings of the human mind and body?those that don't necessarily show up on an x-ray or MRI. Imaginative, inventive, and dynamic, On Shaving Off His Face is meaty poetry, a substantial work that rewards immediate rereading, and deserves a place on the bookshelf for further reflection.

'[It is necessary] whenever we are confronted with the questions and answers of these grand narratives'science, art, faith?that we not forget their limitations, that we be suspicious of their answers, that our belief in what they do never become a belief in what they are. This is at the heart of Neilson's poetry. He does not reject these narratives absolutely, but he also never represents them as sufficient. He pits them against one another and against themselves, mimics them, subverts them, insisting that there is much in human experience that they cannot answer satisfactorily. He reminds us that even our best words?whether science or poetry?can only say so much.

'There is a level of intellectualism operating in On Shaving Off His Face that will challenge many readers. This is not to say that the poetry is overly dense or inaccessible: but it is a poetry that requires more than one sitting to appreciate, especially in the first two sections. Yet one also has a sense that behind these cerebral machinations-reinforced by allusions and images drawn from the worlds of medicine and art and religion-are deep, emotional struggles that fuel his poetic impulse. In other words, Neilson's intellectualism has none of the ornamental or superficial trappings found in most of today's so-called "neo-formalist" Canadian verse writers. On the contrary, Neilson's work reflects more closely the spirit of his modernist predecessors, offering readers the same kind of layered emotional and philosophical intensity that informed much of Eliot and Pound's best and most memorable work. The end result is a richly rewarding collection by a young voice who deserves better attention from the Canadian poetry establishment.'

'On Shaving Off His Face is an uncomfortable book, which is as great a compliment as I can offer. In it Shane Neilson accomplishes something too seldom found among his contemporaries?a poetry of real consequence.'

'Drawing on the image of the human face, Shane Neilson's latest collection of poetry explores both physical and mental pain, grief, and illness. Neilson's expert use of metaphor and command of language makes this a beautifully haunting, absolute must-read book of poetry.'