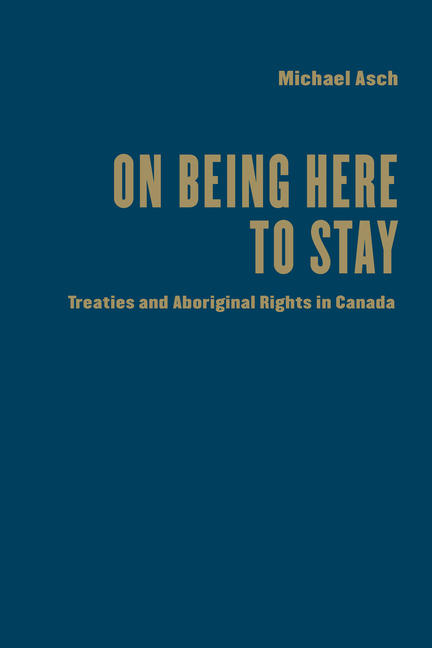 What, other than numbers and power, justifies Canada’s assertion of sovereignty and jurisdiction over the country’s vast territory? Why should Canada’s original inhabitants have to ask for rights to what was their land when non-Aboriginal people first arrived? The question lurks behind every court judgment on Indigenous rights, every demand that treaty obligations be fulfilled, and every land-claims negotiation.

Addressing these questions has occupied anthropologist Michael Asch for nearly thirty years. In On Being Here to Stay, Asch retells the story of Canada with a focus on the relationship between First Nations and settlers.

Asch proposes a way forward based on respecting the “spirit and intent” of treaties negotiated at the time of Confederation, through which, he argues, First Nations and settlers can establish an ethical way for both communities to be here to stay.

‘On Being Here to Stay is a thought provoking read. Michael Asch provides a different perspective on treaty relations not found in most law-oriented texts.’

‘For academic law libraries with collection interests in aboriginal law, this title is an essential addition.’

‘In a work relating to treaty rights, there is much here that will contribute to better understandings across a range of Aboriginal and treaty rights issues. Asch has here extended yet again his lifetime of contributing to discussions on section 35 rights, and we should all immensely appreciate his contribution.’

‘Michael Asch argues his points with elegance and logic. His work is always a pleasure to read…This important reflection on the state of Indigenous/settler relations in Canada merits a wide readership.’

Other titles by Michael Asch

Aboriginal and Treaty Rights in Canada

Essays on Law, Equality and Respect for Difference

Aboriginal Rights and the Canadian Constitution