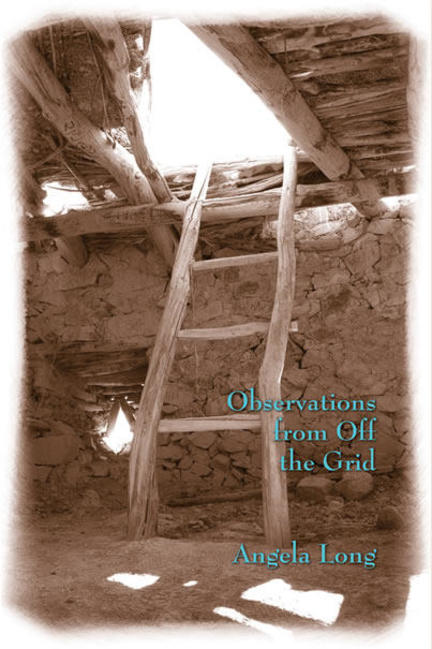 Angela Long had never heard of "off-the-grid" until she found herself living there. In a cedar-log cabin on a remote archipelago, she collects rainwater and fuels her laptop with windpower. Here, a collection of poems has emerged – the product of twenty years spent wandering through different countries and cultures. From Chicacao to Varanasi, Milan to Haida Gwaii, Observations from Off-the-Grid explores life beyond conventional demarcations. Here reader meets author as English teacher in war-torn Guatemala, meditation student in India. The collection gives voice to victims of torture, beggars, the homeless. It gives voice to the heartache of a Sunday afternoon. With its simple language and universal insights, this is a collection that welcomes everyone.

At the age of eighteen, Angela Long flew from Toronto to Frankfurt to begin a long-term love affair with faraway lands. She hitchhiked, cycled, bussed, walked, drove, sailed, and rode trains throughout Europe, Mexico, Central America, Northern Africa, India, America, and Canada. She stopped long enough in Montreal to obtain a diploma in Ceramics, and in Vancouver to complete a degree in Creative Writing. But mostly she kept moving. She volunteered in soup kitchens, orphanages, literacy centres, and farmers' fields. She worked in restaurants, tree-planting camps, hotels, hostels, English-language schools, tutoring centres, gardens, pottery studios, and transition houses.The Toronto Star first published Angela in 2000. Since then, her poetry, short fiction, and non-fiction have appeared in numerous Canadian and International publications, including The Globe and Mail, Utne and Poetry Ireland Review. Her poem "Testament" won first place at the 2008 Surrey International Writing Conference. She has also won awards from Room, Other Voices, Accenti, and The Brownen Wallace Memorial Award. She's received grants from the Ontario Arts Council and Canada Council for the Arts.Her debut poetry collection, "Observations From Off the Grid," explores living off-the-grid both literally and metaphorically. Part docu-poetry, part travelogue, the book begins with her experiences teaching English in war-torn Guatemala during the early 1990s, and continues to explore other parts of the world and mind. Barbara Carter, poetry editor of The New Quarterly, writes: "Angela's poetry captures well what is said and not said. Language has its limitations. As Earl Birney said, 'words are dull servants/ who say less or more than we feel.'"Currently, Angela lives in a log cabin on Haida Gwaii trying her best to capture feelings with words. Even though she's living in paradise, she often looks wistfully at her backpack.

Excerpt: Observations From Off the Grid (by (author) Angela Long)

Take me to your country. Re-name my body parts. Smother me in words that hover like extinct butterflies. Teach me how to unfurl my hips like liana vines. Acclimatize my blood until I shiver at twenty-two degrees. Slough away my dead skin until I glow like burnished earthenware. Teach me how to long for a bowl of rice. Take this passport, this phone, these keys. Take this house. Build me walls that splice darkness with ribbons of dawn.

Angela's poetry captures well what is said and not said. Language has its limitations. As Earl Birney said, 'words are dull servants/ who say less or more than we feel.'

Other titles by Angela Long

Every Day We Disappear