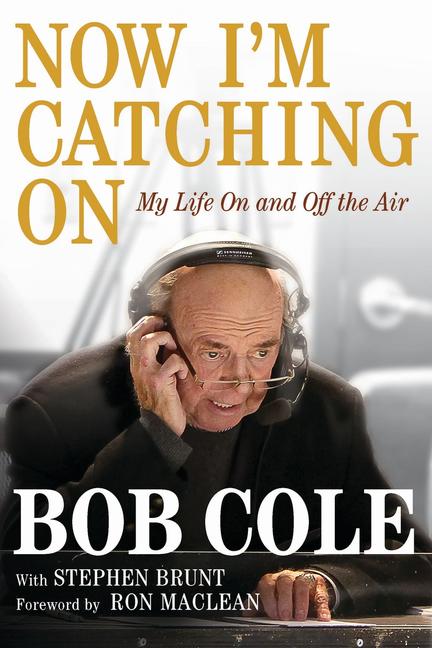 Hockey's most famous voice, now in his own words.

If you are a hockey fan, you know Bob Cole's legendary voice.
He has done the play-by-play for some of hockey's best-remembered games, including the Summit Series, Canada's gold-medal game in Salt Lake City, and twenty years of Stanley Cup finals. The infectious excitement in his voice, his boyish love of the game, and his uncanny ability to anticipate the play have earned him the affection of generations of fans, induction into the Hall of Fame, and the unofficial title of best hockey broadcaster ever.
Now, for the first time, readers will see Cole at the centre of the story rather than watching it from the broadcast booth. We meet the young man growing up in Newfoundland in the years before it joins Canada. We see him talk his way into Foster Hewitt's office and into his first job. And of course we see some of the most cherished players in the game backstage: on the plane back from Russia in 1972, rubbing elbows with Bobby Orr; in the hallway on the old Montreal Forum, running into Jean Beliveau; meeting young players like Steve Stamkos, who grew up listening to him on Hockey Night in Canada.
Written with the expert help of massively bestselling author and respected broadcaster Stephen Brunt, these stories come to life with the charm and detail of a conversation with Cole. They sound like Cole.
No one has been closer to the game over the years than Cole, and no one is more closely associated with all we love about the game than the man whose eyes we've seen it though. Now we will see so much more through those same eyes and in that unforgettable voice.

BOB COLE began broadcasting hockey on CBC Radio in 1969 and moved to television in 1973. Cole was the primary play-by-play announcer for HNIC on CBC, usually working Toronto Maple Leafs games, from 1980 to 2008. Aside from the Leafs broadcasts, he was also a staple for HNIC during the annual Stanley Cup playoffs. He broadcast at least one game in every Stanley Cup Finals from 1980 until 2008. His voice was also heard by a United States television audience whenever NBCSN simulcast an HNIC game that he was calling.

STEPHEN BRUNT was a columnist at the Globe and Mail and is currently with Sportsnet, co-host on The FAN 590's Prime Time Sports with Bob McCown, as well as contributing writer for Sportsnet Magazine and sportsnet.ca. He is the author of the #1 national bestselling Searching for Bobby Orr and All the Way, with Jordin Tootoo. He lives in Hamilton, Ontario, and in Winterhouse Brook, Newfoundland. The author lives in St. John's, Newfoundland.

One of Sportsnet’s Best Sports Books of 2016

Other titles by Stephen Brunt

A Life On and Off the Ice

Hard-Won Battles on the Road to Hope

A Life in Hockey

The Best of Stephen Brunt

Hockey, Canada, and the Day Everything Changed

The Way It Looks from Here