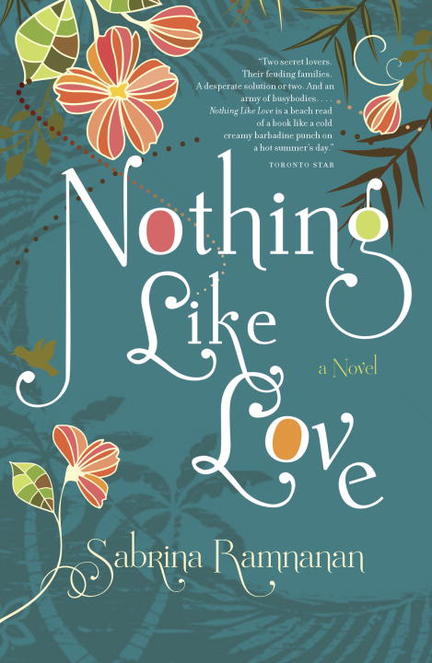 A sparkling, witty and confident debut from a rising Canadian star whose Trinidadian roots and riotous storytelling heritage inform her completely delightful novel.
It is 1974 in the town of Chance, Trinidad--home to a colourful cast of cane farmers, rum-drinkers, scandal-mongers . . . and a bright 18-year-old schoolgirl named Vimla Narine. After passing her A-levels with extraordinary results and accepting the coveted teaching post at Saraswati Hindu school, Vimla is caught with the village pundit's son, Krishna Govind. At night. Holding hands. By morning, even the village vagrant has heard the news and the Govinds and Narines find themselves at the heart of Chance's most delicious disgrace since a woman chased her cheating husband from the district with a rolling pin.
Very quickly, Vimla's teaching post is rescinded, her mother goes on strike from everything, her father seeks solace in the rum shop and Vimla is confined to her home. While Vimla waits for Krishna to rescue her, Krishna's father exiles his boy to Tobago with a suitcase of Hindu scriptures and a command: Krishna will become a man of God. It is his duty.
Just when Vimla thinks her fate couldn't be worse, her best friend, Minty, brings word that Krishna has become betrothed to the beautiful Chalisa Shankar. And Chalisa wants to meet Vimla. Together, Vimla and Minty devise a scheme to win Krishna back that involves blackmailing a neighbour, conspiring with Chalisa, secret trysts in cane fields--and unearthing surprising truths that could change Vimla's, Krishna's and Chalisa's lives forever.

SABRINA RAMNANAN was born in Toronto to Trinidadian parents. She completed her B.A. in English and B.Ed at the University of Toronto. In addition, Sabrina is a recent graduate of the University of Toronto's School of Continuing Education Creative Writing Program and the recipient of the 2012 Marina Nemat award. Her work has appeared in Diaspora Dialogues, Cerulean Rain, Writing in the Margins, The Caribbean Writer, and Joyland. This is her debut novel. She lives in Toronto.

"Romeo and Juliet has provided inspiration for a multitude of writers. . . . Sabrina Ramnanan, who was born in Toronto to Trinidadian parents, adds laughter, light and spice to her version. . . . [an] exuberant storyline, which Ramnanan imbues with humour and peoples with captivating characters . . . a charming comedic voice." “The Globe and Mail
"Two secret lovers. Their feuding families. A desperate solution or two. And an army of busybodies. Welcome to Nothing Like Love, which begins with a mysterious touch. . . . Ramnanan keeps the plot moving quickly, adding characters, secrets and subplots at a breathtaking pace. . . . Nothing Like Love is a beach read of a book like a cold creamy barbadine punch on a hot summer's day." “Toronto Star
"Set in Trinidad, Nothing Like Love is a rollicking and sassy miracle of a novel. Sabrina Ramnanan's  masterfully written romp has it all: spicy Caribbean food, love intrigue, political corruption, Bollywood-style dance, farce, gossip, friendship, beaches, rum punch, Hindi music and an elaborate wedding. It's a story filled with heart, wisdom and family. Nothing Like Love is so damn fine. I loved it!" —Kathryn Kuitenbrouwer, author of All the Broken Things

"Welcome to Chance, a fictional Trinidadian village where the lushness of flora is matched only by the exuberance of personalities." “Maclean’s

"Ramnanan's delightful debut novel leads the reader on a gratifyingly witty and insightful romp through smalltown politics. . . . the sharp wit and barbs in the dialogue keep this novel lively." “Publishers Weekly

"Ramnanan combined the tales of her parents with her own experiences on the island [of Trinidad] to build a story of forbidden love and a spirited young woman's break from small-town life. . . . Nothing Like Love is fast-paced and at times funny. . . . On the surface, the book seems like a typical forbidden love story, but it's more than that." “Metro
"Delightful . . . I felt like I was reading a Jane Austen novel, a comedy of manners, only set in Trinidad in the 1970s in which marriages are arranged according to class and social standing, and women are not meant to have any aspirations other than to be good wives and mothers, but where a whole underside of activities are taking place without the men's knowledge, where the women are really the ones to make things happen. This novel will surely appeal to readers who enjoy a lighthearted love story with a twist." “The Record (Kitchener-Waterloo)