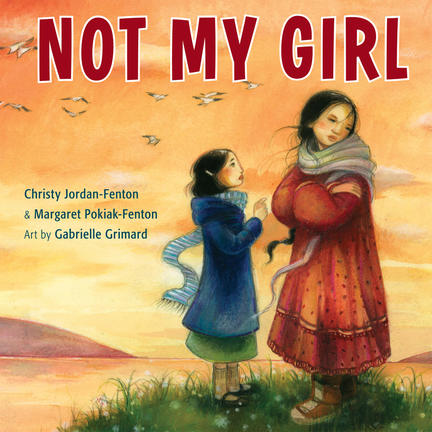 Two years ago, Margaret left her Arctic home for the outsiders' school. Now she has returned and can barely contain her excitement as she rushes towards her waiting family -- but her mother stands still as a stone. This strange, skinny child, with her hair cropped short, can't be her daughter. "Not my girl!" she says angrily.

Margaret's years at school have changed her. Now ten years old, she has forgotten her language and the skills to hunt and fish. She can't even stomach her mother's food. Her only comfort is in the books she learned to read at school.

Gradually, Margaret relearns the words and ways of her people. With time, she earns her father's trust enough to be given a dogsled of her own. As her family watches with pride, Margaret knows she has found her place once more.

Based on the true story of Margaret Pokiak-Fenton, and complemented by evocative illustrations, Not My Girl makes the original, award-winning memoir, A Stranger at Home, accessible to younger children. It is also a sequel to the picture book When I Was Eight. A poignant story of a determined young girl's struggle to belong, it will both move and inspire readers everywhere.

MARGARET POKIAK-FENTON was an author, Inuvialiut knowledge keeper, and residential school survivor. Along with her daughter-in-law, she wrote Étrangère chez moi, Les bas du pensionnat, and Quand j'avais huit ans. The books have garnered more than twenty awards and distinctions, including being placed on the Canadian Children’s Book Centre’s Best Books for Kids & Teens list.

After two years away from home at a residential school, Margaret returns to her Arctic home only to find that she no longer fits in.

Knowing how to read, write, and add numbers does not impress Margaret’s family when she returns to her Arctic home. Margaret is now an outsider and must re-learn the ways of her family (language, food, and behaviour). When using this sequel to When I Was Eight, teachers and students can discuss the themes of loss, family, and belonging.

Also available: When I Was Eight by Christy Jordan-Fenton & Margaret Pokiak-Fenton