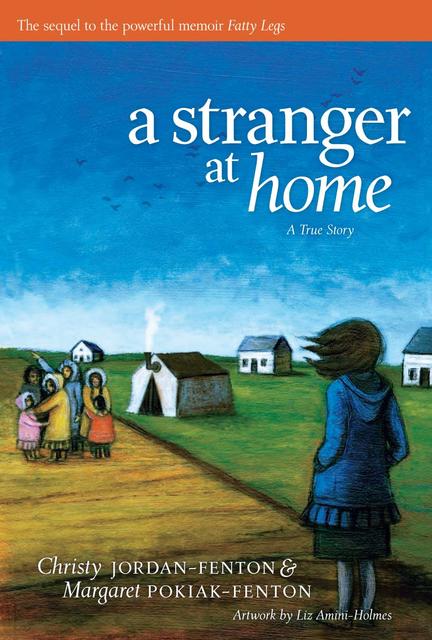 Traveling to be reunited with her family in the arctic, 10-year-old Margaret Pokiak can hardly contain her excitement. It’s been two years since her parents delivered her to the school run by the dark-cloaked nuns and brothers.

Coming ashore, Margaret spots her family, but her mother barely recognizes her, screaming, “Not my girl.” Margaret realizes she is now marked as an outsider. And Margaret is an outsider: she has forgotten the language and stories of her people, and she can’t even stomach the food her mother prepares. However, Margaret gradually relearns her language and her family’s way of living. Along the way, she discovers how important it is to remain true to the ways of her people — and to herself.

Highlighted by archival photos and striking artwork, this first-person account of a young girl’s struggle to find her place will inspire young readers to ask what it means to belong.

MARGARET POKIAK-FENTON was an author, Inuvialiut knowledge keeper, and residential school survivor. Along with her daughter-in-law, she wrote Étrangère chez moi, Les bas du pensionnat, and Quand j'avais huit ans. The books have garnered more than twenty awards and distinctions, including being placed on the Canadian Children’s Book Centre’s Best Books for Kids & Teens list.

“… provides a compelling and moving story of a girl searching for the strength to find her place in the world.”

A Stranger at Home continues the author’s biographical tale begun in Fatty Legs. Two years of loneliness and suffering at residential school allowed Margaret to reach her dream of learning to read. However, it also made her an outsider in her own community. Both she and her family have to learn to adjust to changes in each other upon her return. This is complicated by changes to their traditional Inuit lifestyle as a result of northern development. Jointly authored with her daughter-in-law and sensitively illustrated, this book is highlighted with photographs of the era. It demonstrates the impact that residential schools had on the students, their families and aboriginal communities.

Fatty Legs was nominated for the BC Book Prizes, Sheila A. Egoff Children’s Literature Prize.

For two long years, Margaret Pokiak endured life at the residential school in Aklavik, years vividly relived in her memoir, Fatty Legs (CCBN, Winter 2011), dreaming of reunion with her family on Banks Island. But when, at the age of ten, she rushes off the boat in Tuktoyaktuk, she is taller, thinner, her hair bobbed. Her own mother does not recognize her. With only a few Inuvialuktun words, she can no longer talk to the elders or join in games. Her soul is bruised by the taunts of children, her feet by the stony ground under her traditional kamik. She can no longer eat her mother’s food. In her quest to read and her rush to learn new things, Margaret “had not thought to hold on to the old ones.” An immigrant in her own country, Margaret identifies with a solitary black trapper who is feared by both Inuit and white.

Olemaun/Margaret will always be of two worlds, thrilling to the responsibility of her own dogsled team, but longing for the porcelain dolls in the Hudson’s Bay Company store. Her father’s loving support nurtures Olemaun, the strong Inuit girl inside her. Long winter days at the feet of the elders help her reconnect with her heritage.

Margaret learned the lessons of the storytellers well. Her own narrative is rich in details both painful and triumphant. Her memories are clear and fierce. In Fatty Legs, a young girl tried to hold on to her sense of self. A Stranger at Home is a more layered account of a young girl trying to find and reconcile her two selves. In the words of the illustrator, these are “tender and important stories,” making a valuable contribution to our understanding both of residential schools and of broader issues of identity and community.

In this sequel to Fatty Legs, ten-year-old Margaret excitedly returns home after spending two years at a residential school. Margaret does not receive the homecoming she expected as her mother doesn’t recognize her, she’s forgotten her people’s language and she can’t stomach her mother’s food. Margaret begins a painful journey to reclaim her rightful place among her people.