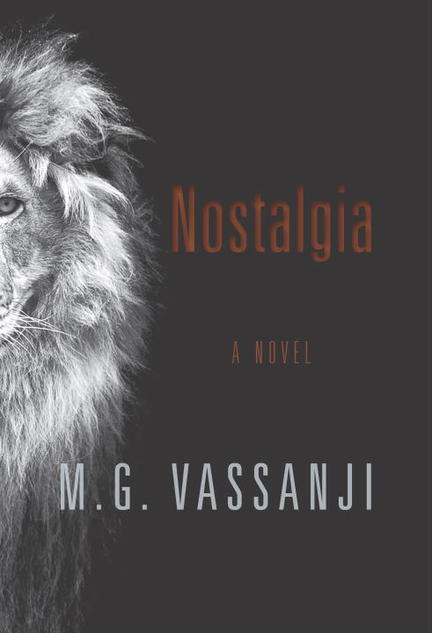 From one of Canada's most celebrated writers, two-time Giller Prize winner Moyez Vassanji, comes a taut, ingenuous and dynamic novel about a future where eternal life is possible, and identities can be chosen.

In the indeterminate future in an unnamed western city, physical impediments to immortality have been overcome. As society approaches the prospect of eternal life, a new problem must be confronted: with the threat of the brain's storage capacity being overwhelmed, people want to move forward into the future free from redundant, unwanted and interfering memories. Rejuvenated bodies require rejuvenated identities--all traces of a person's past are erased and new, complete fictions are implanted in their stead. On occasion, though, cracks emerge, and reminders of discarded lives seep through. Those afflicted suffer from Leaked Memory Syndrome, or Nostalgia, whereby thoughts from a previous existence burrow in the conscious mind threatening to pull sufferers into an internal abyss.
Doctor Frank Sina specializes in sealing these memory leaks. He is satisfied in his profession, more or less secure in the life he shares with his much younger lover, content with his own fiction--a happy childhood in the Yukon, an adulthood marked by the influence of a mathematician father and poet mother. But one day, Presley Smith arrives in Frank's office. Persistent thoughts are torturing Presley, recurring images of another time and place. As he tries to save Presley from the onslaught of memory, Frank finds clues that suggest Presley's past may be located in war-torn, nuclear-ravaged Maskinia, a territory located in the southern hemisphere, isolated from the north by fiercely guarded borders and policy barriers. Frank's suspicions are only intensified when the Department of Internal Security takes an interest in Presley. They describe him as one of their own, meaning his new life was one they created for him, and they want him back. Who was Presley before the Department remade him, what secrets are buried in the memories that are encroaching upon him?
As Frank tries to save Presley from both internal and external threats, cracks emerge in his own fiction, and the thoughts that sneak through suggest a connection with the mysterious Presley that goes well beyond a doctor and his patient.

From as long back as we can imagine, we humans have striven for immortality. Now that, in our rough and ready way, we’ve begun to approach it, we face the problem of what to do with the vast amount of information we carry. Even if the brain allowed such storage capacity, who would want to be burdened by quantities of redundant, interfering memo- ries? Painful and messy ones? Therefore as regeneration techniques advanced to allow the body to last longer, mind renewal grew alongside. The term is colloquial and inac- curate, of course—what is a mind, after all? No matter, as someone quipped. In fact, it’s selected portions of long-term memory that we renew. New memories in new bodies. New lives. That’s the ideal, though we are still far from it. The body may creak and wobble; memory develop a crack or hole. In the leaked memory syndrome, or Nostalgia, thoughts burrow from a previous life into the conscious mind, threatening to pull the sufferer into an internal abyss.
I am myself a GN, a new-generation person—and feel the body-age sometimes, in the nuts and bolts, as it were, the connections and interphases. By law, no record of a person’s past life exists, nor of calendar age, but the body knows. I am old, in the original sense, though the word hardly gets used these days. Surely there’s a little truth to the media hype that we’ve attained the status of ageless gods. A flawed immortality, but we are the fortunate ones, a new species in the making, who’ve defied death. Very nearly.
Our triumph comes, naturally, with its problems. We’ve not created Utopia, perhaps never will. But the problems are old wine in new bottles, we’ve had them always. The war of the generations, as popularly called, or more plainly, the young versus the old, shows no signs of abating; mostly it’s a cold war, manifest in constant disgruntlement. There’s the occasional street riot that vents frustration. The GN-serial rampage two years ago was a terrible exception—eight elderly GNs murdered over a period of twelve months, their bodies savagely mutilated. The young G0 criminals were appre- hended and dealt with. We have assurances from authorities that such acts are very unlikely in the future. We’re not rid of fanatics either—those who will cling to outdated ethnic identities that most of us have forgotten, or for whom lon- gevity is philosophically or morally repugnant. The wide- eyed few who dare to turn off their lights, turn down this gift that we’ve given ourselves. But progress is forward, we cannot go back.

At day’s end I came out of the Sunflower Centre into a world of cheery autumn brightness, the courtyard flush in  the clear light of a low sun. Further up, the Humber ran plac- idly along its course down to the lake, and two crews rowed their boats one behind the other, in no great hurry. Across the river, the yellow leaves of October had been set coolly ablaze. It’s always a breathtaking sight. On the bank, this side, students sat stretched out, some with their book pads open, others strolling or hurrying along the paved path, making way for the odd bicycle or two.
I arrived at the riverbank and sat down on a bench. There  was  a  message  from  Joanie;  she would  be  out that night at a hockey game with a friend. The Friend, I had every reason to surmise. I never cared for the sport, and was teased for it: Who was I, really? Meaning, what was I before I became what I was. I am, was always my answer. It was my creed, as a minder of memories. I didn’t care for the befores. But Joanie is a G0, a BabyGen, and Babies have no previ- ous lives, no befores. They have actually been born—to be beautiful: flawless, symmetrical,  smooth.  She  was  visiting a neighbour and during a block barbecue joined me with a beer and seduced me with her banter. We dated hesitantly, then more passionately, and cohabited. But my beautiful BabyGen was now seeing someone else on the side. Who else but another Baby this time, it always comes to that, doesn’t it. And I no longer wondered what she saw in me.
I popped a couple of pills into my mouth, looked around me; eyes lingered a little too long over a couple of youngsters necking.
The problem with staring at beautiful youngsters is that you are caught between the lust for the pure and supple beauty of youth (I did have Joanie) and a desire for chil- dren of your own. I didn’t have children; if I did, in another life that had been erased, I didn’t know. But this man from Yukon, Dr Frank Sina, had none and longed for one. Why the persistent need, like a thirst when you wake up, for a child of your own? There are areas of the brain that conspire to create longings that should have been buried and gone. No amount of erasure and implantation can create musicians or artists at will. Or take away the need for a child.
But what of Presley Smith? He looked surprisingly youth- ful and limber—and yet his record showed a GN, like me. Evidently I have been negligent, not paid heed to those keep- fit reminders we now find everywhere—and so I complain of malfunctions.
It’s midnight, the lion is out. A chant carried over from the past? A line from a poem?
Have I ever had stray thoughts that needed fixing? I cannot know, of course. But judging by my comfort with myself, I can only conclude that whoever my doctors were, they had done a perfect job sealing my previous life off. There was a short period in the past, however, when, very foolishly, though for the sake of research, as I explained to myself, I would lie in bed looking up at the ceiling and fish for a thought; when a likely candidate came I would detain it by repeating it over and over. It never lasted. Soon enough and mercifully I realized my folly and stopped fishing. Now as I sat meditating before the quietly flowing river bathed in the soft afternoon sunlight, I realized that I had a thought that would not go away, and it was precisely this: the image and words of Presley Smith.

"Vassanji hardly needed the cover of speculative fiction to explore generational anxiety, ethnic identity, economic subjugation or postcolonial strife. Yet, it's a genre he inhabits with ease. Better still, the change of scenery has put him in an appealingly playful mood. Nostalgia is often funny and ironic." —The Globe and Mail
"This entertaining novel opens in the vein of Conrad, alludes to Mary Shelley, and works in aspects of The Bourne Identity and the drama of Patty Hearst. Who knew Vassanji could be this much fun? . . . [Nostalgia] is a brilliant success." —Literary Review of Canada

"Always a visual writer, Vassanji is virtually cinematic in his evocation of a dysfunctional, futuristic Toronto. . . . Nostalgia thrills, inspires, and, in its best moments, provokes." —Quill and Quire
Praise for The In-Between World of Vikram Lall:
• Winner of the 2003 Giller Prize
• "The In-Between World of Vikram Lall . . . wrestles passionately and intelligently with big intractable questions. Belonging in a category with Tolstoy's War and Peace, Vassanji's saga is sweeping in scope and covers the history of Kenya from the late 19th century through independence in 1963 to the corrupt and violent present." --The Globe and Mail
• "This novel is one of the most satisfying you will come across in a fall season that is quickly shaping up to be stellar. . . . A gripping story and an enduring historical document." --National Post
• "A novel of elegant gesture, complex understanding, bright passion and historical pain." --O, The Oprah Magazine

This book was really interesting. The premise was new to me and quite fascinating and the progression (transformation?) of the main character was interesting.

The author made a lot of subtle and not so subtle commentary about the dream to live forever and about way way advantaged people treat disadvantaged people (pitying them, but still acting as though they're expendable).

The one thing I didn't like was the last chapter. It was more of an epilogue and, save for exposing one key connection between two characters, it felt a bit gratuitous. Worse, it felt a little out of place and ruined the beauty of the last scene.

All that said, it's a good book and worth the read.