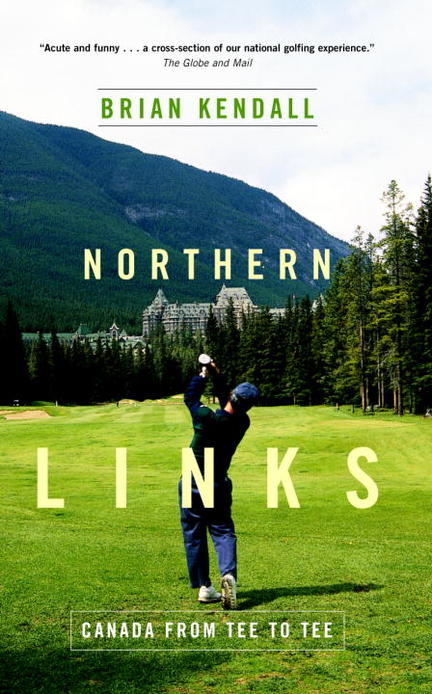 “I’m still not certain why I stayed away almost 30 years from a game I had loved passionately as a kid. I know I never stopped believing that in so any ways golf is the most rewarding of sports, and I fully intended to one day make my way back. It just took me a little longer than I expected.”
Thus Brian Kendall begins his unforgettable journey through the world of Canadian golf, a mid-life voyage of discovery that any golfer might envy. At the Banff Springs Golf Course and other world-famous courses, readers walk in the footsteps of Stanley Thompson, Canada’s most celebrated golf course architect. By tracing his own personal history with the game, Kendall introduces us to the legends such as Marlene Stewart Streit, who relives her meteoric rise five decades earlier, and his boyhood hero, the great George Knudson. Here, too, are the stories of Ben Kern, Canada’s top instructor; senior golfers Bill Hardwick and Doug Robb, who made their own mid-life dreams come true on the European Senior Tour; and King of Aces Steve Johnston, who has scored an astonishing 47 holes-in-one. Not forgotten are the unsung heroes of Canadian golf: the kids who caddy at the historic Hamilton Golf and Country Club; a colourful gang of fanatics who get their wintertime fix in a covered dome; and two young professionals desperate to make their mark on the Canadian Tour. From the oceanside fairways of Cape Breton’s Highlands Links to a midnight tee-off at Yellowknife’s famous Midnight Classic, Northern Links tells the story of golfers whose passion for the game fuels a nation’s obsession.

Brian Kendall is the author of five previous books, including 100 Great Moments in Hockey, Shutout: The Legend of Terry Sawchuk, and Our Hearts Went Boom: The Beatles’ Invasion of Canada. He and his wife live in Toronto.

I’m still not certain why I stayed away almost 30 years from a game I had loved passionately as a kid. I know I never stopped believing that in so many ways golf is the most rewarding of sports, and I fully intended to one day make my way back. It just took me a little longer than I expected.

Like many of my generation, I was first drawn to golf by the exploits and charisma of Arnold Palmer, who did more than any other player to popularize the game. Suddenly golf, until then largely a pastime of the rich or at least the solidly middle class, became fashionable even in my working-class suburban neighbourhood. My friends and I began saving our allowances to buy clubs, one at a time, from Canadian Tire, and we would gather on summer evenings to smack balls around the open field at the end of our street. Eventually, whenever we could afford it, we took our games onto the nearby public course, where the green fee, as I remember, was $8.

Then, with impeccable timing, just as the game was taking off in Palmer’s wake, there came a hero whom Canadians could proudly call our own. George Knudson, destined to become our greatest professional golfer, emerged from Winnipeg’s St. Charles Golf and Country Club to thrill us all with a string of victories on the PGA Tour.

After seeing him on newscasts or watching him Sunday afternoons on our old black-and-white TV, I would go out and try to emulate his cat-like walk on the fairway and that impossibly sweet swing he had perfected over countless hours of practice, the stroke even Ben Hogan said was one of the finest he’d ever seen. Next to my favourite movie actor, Steve McQueen, Knudson seemed to me the coolest man alive. His hair cropped short in those days, he wore tinted glasses over light-sensitive eyes and was never, except during his swing, seen without a cigarette in his mouth or carefully cupped in his right hand against the fairway breezes.

Most intriguing of all, Knudson, like McQueen, perpetually wore a thin enigmatic smile, as if he were in on a joke or a secret the rest of us could never begin to understand.

When I was 16, I stopped playing the game. I’ve since discovered that many golfers quit around this age for other pursuits: girls (or boys), part-time jobs, higher education, other sports. Still, I never lost interest in golf, and in particular I continued to follow George Knudson’s progress in the sports pages.

The decades passed and still I didn’t return. I always said I’d come back when I had the time to get serious again about the game, the way I was when I was a boy. But one thing or another always intruded, and time slipped away.

At last, in a burst of mid-life inspiration, I hit upon the idea for this book. I’d begin a journey through the world of Canadian golf that would, I hoped, reignite the passion I felt for the game when I first began. Over the next two summers, I’d try my damnedest to catch up and make up for all the precious years I had lost.

It was a dream assignment, one every golfer in the land might envy. I would enjoy the privilege of playing alongside the incomparable Marlene Stewart Streit at the scene of the triumph that started her meteoric rise five decades ago. At the Banff Springs Golf Course, among other celebrated layouts, I walked in the giant footprints of Stanley Thompson, our most revered golf course architect. Senior golfers Bill Hardwick and Doug Robb inspired me with the stories of how they made their mid-life dreams come true on the European Senior Tour. In Yellowknife I fought swarms of blackflies to compete in the famous Midnight Classic. I met and marvelled at Steve Johnston, our own King of Aces, who ranks third in the world with an astonishing 47 holes-in-one. One autumn I explored the length and breadth of Cape Breton, the ruggedly beautiful isle that is fast remaking itself into the country’s hottest golf destination. And on a sweltering August afternoon, I carried the bags alongside the kids at the historic Hamilton Golf and Country Club, one of the few courses in Canada that still supports a caddy program.

There were still more memorable rounds played, fascinating Canadian golfers (both famous and obscure) met, insights gained and lessons learned. But by far my biggest discovery, even if it’s one I strongly suspected all along, was that once golf has you in its velvet Vardon grip it never lets go.

And that I was a fool for letting 30 years pass before teeing it up again.

Chapter 1: In George We Trust

“Okay, let’s see you hit one,” Ben Kern said, walking to where I stood on the practice range.

Even though I’d just finished stroking four or five shots I regarded as reasonable efforts, my confidence melted under the professional gaze of the man thought by many to be the country’s top instructor.

I felt like burying myself in the nearest bunker. My first significant shot of the season -- in truth, the symbolic beginning of my entire Northern Links adventure -- and all I’d caught was air.

Kern smiled encouragingly at me from under his wide-brimmed straw hat.

“I guess you make me nervous,” I said, knowing how lame that sounded the moment I said it.

Together with eight other golfers of wildly varying skill levels, I’d come to Devil’s Pulpit, a course of national renown set in gently rolling countryside about 25 miles northwest of Toronto, for a clinic with Kern, the Pulpit’s director of golf. A former PGA Tour player, Kern had tutored many of Canada’s top stars, including Lorie Kane and David Morland IV. What he had imparted to them, and what he was attempting to introduce to us, were the teaching principles painstakingly developed by his good friend and mentor, the late, great George Knudson.

Venerated by his peers as a true authority on the mechanics of the swing, Knudson possessed a technique so fluid and pure that other golfers on the PGA Tour often stopped to watch in envy when he practised. “There was poetry in the way George swung a golf club,” Kern told me. “There aren’t too many players who never lose their swing, not even once. But George was always confident when he walked onto a golf course that he had exactly what he had the day before.”

My fondest hope was that the months ahead would lead me to recapture the enthusiasm I felt for the game back in the days when George Knudson was busy inspiring an entire generation of Canadian golfers. What better way to begin than by trying, as best I could, to absorb the swing theories of my boyhood idol?

“Acute and very funny … Kendall, the seasoned sports journalist, travels across the Dominion seeking to profile a cross-section of our national golfing experience.” -- The Globe and Mail

Praise for 100 Great Moments in Hockey:
“Here is the delectable treasure among coffee table books directed at the hockey market.... Kendall has done a marvellous job.” -- Jim Proudfoot, The Toronto Star

Praise for Our Hearts Went Boom:
“Kendall conveys very well the hysteria that attended Beatles’ appearances.” -- The Globe and Mail

“An estimable act of hockey history ... Sawchuk’s life was as complex as any; Kendall’s delivery of it is clear and compelling.” -- The Globe and Mail

“An engaging and authentic story of a Canadian who against all probabilities became a star in the big leagues.” -- The Calgary Sun

Other titles by Brian Kendall