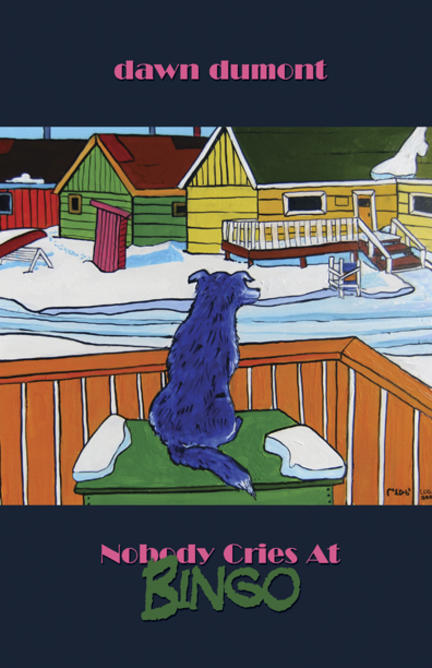 Author and narrator Dawn Dumont paints a picture which goes beyond many cultural stereotypes. She talks about drinking and bingo and the toughness needed to deal with bullying by the other natives and also by her white peers. Readers see reserves in both Manitoba and Saskatchewan from the native point of view. There is a sense of how distanced these are, both literally and figuratively, from non-natives; yet, at the same time Dumont reveals how close-knit many families are, and she shows her readers that, despite cultural differences, natives and whites are really quite similar. Dawn has the same dreams, problems and aspirations as any other teenage girl. Dumont's book is something between a novel and a memoir since the author was born and raised on the Okanese First Nation in Saskatchewan. As in any novel, each chapter adds to readers' understanding of the main characters, and yet each chapter can stand on its own as a short essay. Readers will appreciate Dumont's dry sense of humour throughout since Dumont undoubtedly 'tells it like it is' but always with her own brand of somewhat impertinent humour. In a classroom or book club setting, Nobody Cries at Bingo would be an excellent springboard for a discussion about a wide variety of native issues and what can be done to promote understanding between natives and non-natives. Dumont's book approaches the issues in a manner which is both straightforward and humorous and perhaps suggests this is a good way for all of us to begin such a conversation.

Dawn Dumont is a Plains Cree comedian and actress born and raised on the Okanese First Nation in Saskatchewan, Canada. Dawn has made people laugh at comedy clubs across North American, including New York’s Comic Strip, the New York Comedy Club, and the Improv. She began her comedy career in Toronto on stages such as Yuk Yuk’s and the Laugh Resort. Dawn is currently a comedy writer for CBC Radio and the Edmonton Journal, and is a Story Editor for By the Rapids, an animation comedy series on APTN. Dumont’s writing has been published in the anthologies Native Women in the Arts and Gatherings, as well as in Rampage Literary Journal. Her personal essay “Transformations” was published by Toronto’s Now Magazine. Most recently her play, Nicimis (Little Brother) was workshopped at Native Earth’s Performing Arts Weesageechak Begins to Dance Festival in Toronto, with artistic director Alanis King. She lives in Edmonton, Alberta. Nobody Cries at Bingo published by Thistledown Press in 2011 is a rare and beautiful fictional memoir of her growing up in the culture of the Okanese First Nation.

Nobody Cries at Bingo

This engaging and funny memoir chronicles the author’s experiences growing up on the Okanese First Nation reservation, opening up her experience to outsiders. Dumont manages to convey the mindset of herself as a little girl living in that environment, and she does it with a lot of humour. Through her storytelling, she addresses both the positives and negatives of rez life, all while very much engaging the reader in the story. Dumont’s short stories have been published in anthologies and her play Nicimis was workshopped at the Weesageechak Begins to Dance Festival. She is also a stand-up comedian and a program host on APTN.

Caution: Contains some swearing, discussion and descriptions of alcohol and drug use, discussions of a sexual nature.

Nobody Cries at Bingo

The reader is invited to witness the Dumont family’s life on the Okanese First Nation reserve, as narrated by Dawn herself. As she recounts with wry humour her story of family and school life and off-reserve experiences, the tale of a girl who loves to read begins to unfold. It is her hopes, dreams and incredible humour that reveal to us the beauty and love within her family.

Other titles by Dawn Dumont