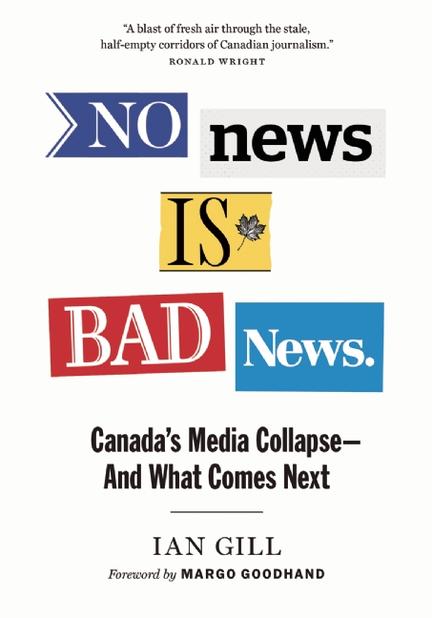 “A blast of fresh air through the stale, half-empty corridors of Canadian journalism.”–Ronald Wright

An urgent, necessary look at why Canada’s media is dying—and how we can save it.

Canada’s media companies are melting faster than the polar ice caps, and in No News Is Bad News, Ian Gill chronicles their decline in a biting, in-depth analysis. He travels to an international journalism festival in Italy, visits the Guardian in London, and speaks to editors, reporters, entrepreneurs, investors, non-profit leaders, and news consumers from around the world to find out what’s gone wrong. Along the way he discovers that corporate concentration and clumsy adaptations to the digital age have left Canadians with a gaping hole in our public square. And yet, from the smoking ruins of Canada’s news industry, Gill sees glimmers of hope, and brings them to life with sharp prose and trenchant insights.

Ian Gill is a founding partner of Salmon Nation and former president of Ecotrust. He worked as a writer and broadcaster for CBC Television, where he won numerous awards for his documentary reporting. He lives on an island in the unceded territory of the Nuu-Chah-Nulth people on the west coast of British Columbia; and occasionally in Vancouver, where he is co-founder of the independent bookstore Upstart & Crow.

Margo Goodhand is the former editor-in-chief of the Edmonton Journal and the Winnipeg Free Press. She has been published in newspapers and magazines across Canada, including the Globe and Mail and The Walrus, as a syndicated columnist, news reporter, travel writer, editorial writer and arts and book reviewer.

Other titles by Ian Gill

All That We Say is Ours

Guujaaw and the Reawakening of the Haida Nation

Other titles by Margo Goodhand

The Origins of the Women’s Shelter Movement in Canada