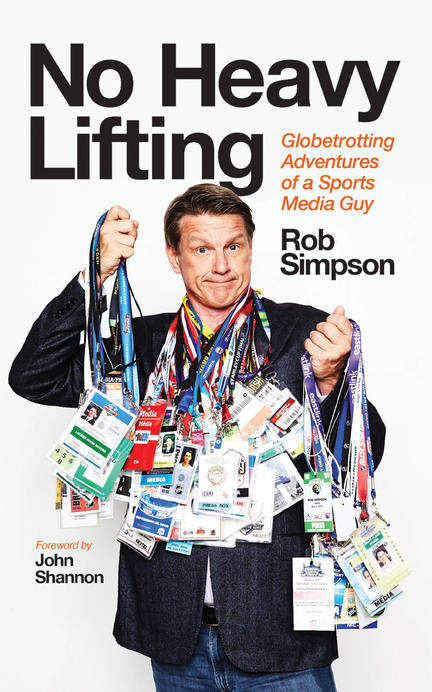 Though he’s now known to hockey fans across North America for his NHL commentary and as co-host of the Stellick and Simmer SiriusXM radio show, Rob Simpson didn’t start his radio and TV career rinkside: his media background has taken him around the world and into uniquely unexpected situations. In No Heavy Lifting, Simpson recounts some of his wildest adventures from stints as a TV weatherman in Hawaii, a hockey reporter at the Torino Olympics, a skydiver in Idaho, and a marathoner in New York, to immigrating north of the border.

Take ten grand a year out of your bank account, for ten years, and gamble it away? Check. Take a humanitarian trip to the Serengeti with a beloved NHL player whose brain damage may have led to his death? Check. Alienate and scandalize the most powerful man in Hawaiian politics? Check. Climb Mount Kilimanjaro wearing someone else’s boots and clothes? Checkmate.

John Shannon is a Canadian sportscaster, television producer, and former panelist on Rogers Sportsnet’s Hockey Central. He’s known for producing Hockey Night in Canada, including Coach’s Corner and the Satellite Hot Stove. In 2003, he won a Sports Emmy Award for Outstanding Live Sports Special for his work on NBC’s broadcast of the XIX Olympic Winter Games in Salt Lake City. Follow him on Twitter @JShannonHl.

“It’s as if Simpson invited readers to join him for a beer and then began telling his best stories . . . an entertaining trip through Simpson’s world.” — PublishersWeekly.com

“If you’ve spent any time with Simpson personally, then you know what a hoot he is and how good times always seem to find him. If you haven’t had that experience, then read the book . . . it’s the next best thing to being there.” — Neil Everett, ESPN Anchor

“Whether it’s being on Kilimanjaro with Zdeno Chara, the Olympics in Torino, or calling the Northwest League championship series in Portland, there’s nothing like being there with Simmer! Something unique always happens and I couldn’t wait to read where the next adventure would take me!” — Sam Rosen, TV voice of the New York Rangers (and NFL football on FOX)

“For such an annoyingly tall broadcaster, he tells great stories and has written a really fun book.” — James Duthie, TSN anchor and author

“Spanning the globe, Simmer has been there, done that, and shares these stories with his usual sense of enthusiasm, adventure, and, most importantly, sense of humour.” — Gord Stellick, Sportnet radio, SiriusXM NHL Network (co-host of Stellick & Simmer)

Other titles by Rob Simpson

Four Decades of the Boston Bruins in Photographs

A Half-Century of the Detroit Red Wings in Photographs

Black And Gold Revised And Updated

Other titles by John Shannon

Hard-Won Lessons from a Hockey Life