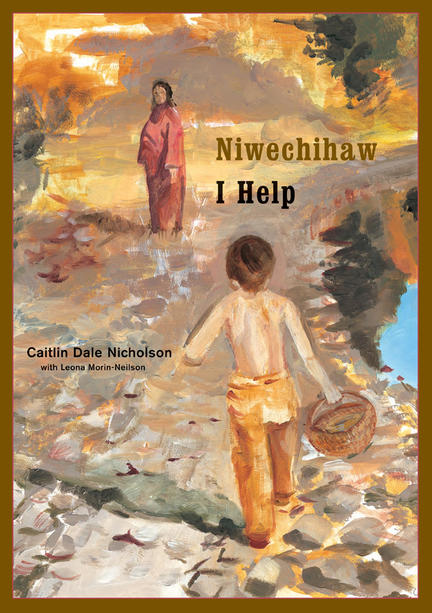 This simple story in Cree and English explores a young child's relationship to his kuhkom, his grandmother, as they go for a walk in the bush to pick rosehips. The young boy follows his grandmother, walking, listening, picking, praying, eating, just as she does. In doing so, he absorbs the rich cultural traditions and values of his Cree heritage.

Caitlin Dale Nicholson is a graduate of the First Nations Studies program at the University of Northern British Columbia, and she teaches art and English at an alternate school in Prince George. She is also learning about traditional plant medicines from Leona Morin-Neilson. Caitlin’s first picture book, Niwechihaw / I Help, has been highly acclaimed. She lives with her family in Prince George.

LEONA MORIN-NEILSON teaches Cree at the “Power of Friendship” Aboriginial Headstart program in Prince George, British Columbia, and at the University of Northern British Columbia. She also teaches people in her community about traditional plants and how they can be used for medicinal purposes.

...a quiet narrative...broad brush strokes and blurred colours conveying light and atmosphere as much as personality...the simple verbs in present tense provide a wealth of clues about the workings of the Cree language.

...acrylic-on-canvas paintings give a dream-like feel to the story, making it almost a nostalgic look at childhood...Recommended.

This is the simple story, told in Cree and English, of a young boy’s day with his grandmother or kokhom as they go to pick rosehips. He follows along copying what she does until it is time for her to rest and he is ready to play. The story is illustrated with acrylic on canvas paintings and contains a recipe for rosehip tea at the end.

Caution: The boy rides in the car with no seat belt and uses a slingshot to play.

Another picture book also pays homage to the importance of an indigenous woman and, in this case, her knowledge of plants. Niwechihaw/ I Help is by author and illustrator Caitlin Dale Nicholson, a First Nations Studies program graduate at the University of Northern British Columbia. Nicholson was inspired by the living example of storyteller and mentor, Cree elder, Leona Morin-Neilson. Kôhkom (grandmother) packs her young grandson into the truck to go for a day of rose-hip picking in the British Columbian forest. Nicholson’s undetailed work allows the human figures to blend into the quiet, golden-red landscape. When they return home, Kôhkom is ready to relax, but not the boy. His impish playfulness livens the almost somber seriousness of the harvest day.

I was especially delighted to see the Cree text (Y dialect) placed first on each page, followed by the English. The repeated words and simple sentences in this storybook make it a treat for very young children, or for those older readers who could become quite excited about trying a few sentences in Cree. “Kôhkom môsâhkenum. Kôhkom picks. Nimosâhkenen. I pick.”

This simple Cree-English tale explores a young child’s relationship with his grandmother, or kôkhom, as they walk in the bush to pick rosehips. In doing so, he absorbs the rich cultural traditions and values of his Cree heritage. Includes instructions on how to prepare rosehip tea.

Other titles by Leona Morin-Neilson

The learning skills part of the report card is divided into areas such as Self-Regulation, Organization, Initiative—habits that affect all areas of …