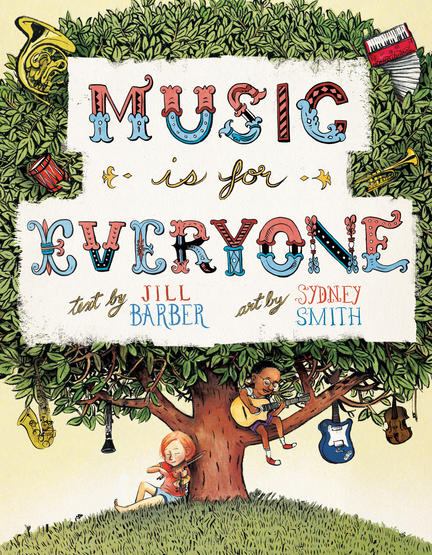 Music is for Everyone is sure to get you excited about making music! Singer-songwriter Jill Barber takes her young readers through many different kinds of music—hip hop, jazz, classical, folk—and instruments in an energetic, rhyming tour. Sydney Smith’s gleeful illustrations capture all the joy that comes from making music—in all its forms!

Jill Barber is an acclaimed Canadian singer-songwriter, Juno nominee, and multiple East Coast Music Award winner. An Ontario native and graduate of Queen’s University, Jill spent six years in Halifax developing her music career before following her heart across the country to Vancouver, where she now lives with her husband. Baby’s Lullaby first appeared on a CD compilation for Read To Me, a program that promotes early literacy in Nova Scotia. This is Jill’s first children’s publication. HildaRose lives and works in Prospect Bay, Nova Scotia. Trained as a graphic designer, she worked in museums for many years but now works in her home studio on various graphic design and illustration projects, as well as studying towards a MEd. She has illustrated several children’s books, including the baby board book Kisses, Kisses Baby-O!

Other titles by Jill Barber

Atlantic Canada Children's for the Holidays 2014