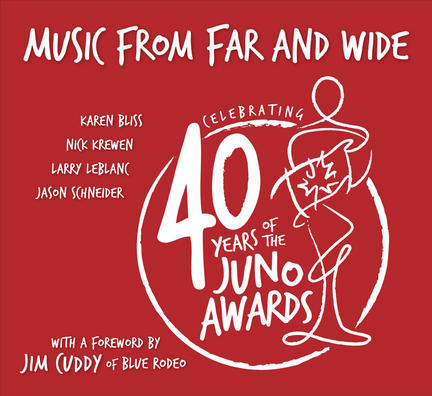 The Juno Awards are presented annually to Canadian musicians to acknowledge their artistic and technical achievements. New members of the Canadian Music Hall of Fame are also inducted as part of the awards ceremonies.

Depending on the award, winners are chosen by either members of the Canadian Academy of Recording Arts and Sciences or a panel of experts. In almost all of the main general categories, such as Album of the Year or Artist of the Year, nominees are determined by sales during the qualifying period; in genre-specific categories, they are determined by panel.

In? 1964, before the Junos were established,

RPM Magazine polled its readers to determine the best artists and groups in Canada. Each December, the magazine published the results.Record-label owner Stan Klees met with RPM founder Walt Grealis to plan a formal awards ceremony for the music industry. Instead of merely publishing the award results in RPM, presentations would be made at a physical venue. The first official Gold Leaf Awards ceremony took place February 23, 1970 in Toronto.Later that year, RPM invited its readers to suggest a new name for these awards. &ldquo;Juneau&rdquo; was submitted, in honour of Pierre Juneau, the first head of the Canadian Radio-Television Commission and instrumental in establishing Canadian content regulations for broadcasters, to promote Canadian artists. By 1971, the moniker was shortened and the awards ceremonies became the Juno Awards.From 1970 to 1973, winners&rsquo; names were published in RPM prior to the awards night; from 1974 the winners were not made public until the ceremonies. In 1974, music industry representatives formed an advisory committee for the Junos in, which became the Canadian Music Awards Association the following year. The association assumed full management and operation of the Juno Awards from 1977, changing its name to the Canadian Academy of Recording Arts and Sciences (CARAS).The Junos were first televised throughout Canada in 1975 on CBC Television.Initially, the awards were held during the early part the year. In 1984, organizers postponed the awards until December. In January 1988, in response to declining viewership, CARAS rescheduled the Juno broadcasts to earlier in the year. This meant that postponing the awards until March 12, 1989, therefore leaving the 1988 calendar year without a ceremony.In 1996, Oh What A Feeling: A Vital Collection Of Canadian Music was released as a four-CD box set to mark the Juno Awards&rsquo; 25th anniversary. It featured popular songs by Canadian artists from the 1960s to 1990s. In 2001, a second four-CD box set was released to celebrate the awards&rsquo; 30th anniversary. In 2006, a third box set was released to celebrate the 35th anniversary.Broadcast rights to the Juno Awards were transferred from CBC to CTV for the 2002 ceremonies. In 2006, Junos were broadcast for the first time internationally by MTV2 in the United States and several affiliated MTV channels worldwide, making the telecast available to approximately 250 million people.That same year, Bruce Cockburn was honoured with the inaugural Humanitarian Award.At the 2007 ceremony, host Nelly Furtado made Juno history by being the first artist to win every award for which she was nominated, including the two most prestigious honours: Album of the Year and Artist of the Year.

Jim Cuddy is a Canadian singer-songwriter primarily associated with the band Blue Rodeo. He attended North Toronto Collegiate Institute, where he met and befriended Greg Keelor, his future bandmate. He also went to Upper Canada College and Queen's University. Cuddy was born in Toronto, Ontario.

Karen Bliss is an established music journalist whose work has appeared in print and online for RollingStone.com, MSN, AOL, Elle Canada, Billboard, Toronto Star, and dozens of other publications. Along the way, she has interviewed Kurt Cobain, Shania Twain, Eddie Vedder, Sheryl Crow, Alanis Morissette, Jimmy Page, Avril Lavigne, Lenny Kravitz, Britney Spears, and thousands more. She also operates her own online magazine, Samaritanmag.com, and has just released an animated, anti-racism PSA, The Girl With Pinhead Parents, on YouTube, voiced by Nelly Furtado, Chris Bosh and others, based on her kids picture book of the same name. She is also creator of the Fan Lowdown book series, which launched with the multi-platinum-selling rock band Hedley. Bliss is co-author of Music from Far and Wide: Celebrating 40 Years of the Juno Awards.

Other titles by Karen Bliss

Tales of a First-Round Nothing

My Life as an NHL Footnote

Other titles by Nick Krewen

Other titles by Jim Cuddy

The Authorized Biography of Art Bergmann

The Northern Roots of American Music ... From Hank Snow to The Band