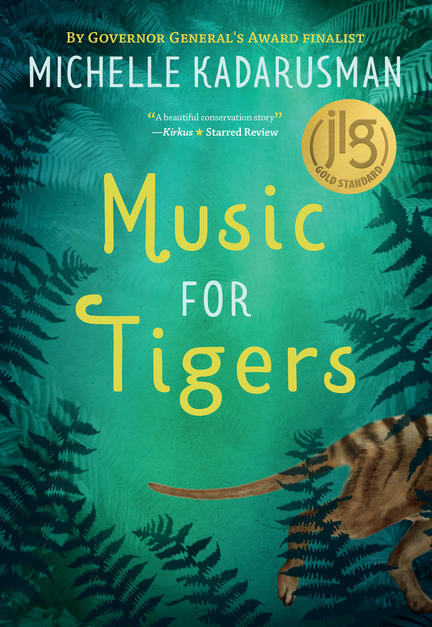 Shipped halfway around the world to spend the summer with her mom’s eccentric Australian relatives, middle schooler and passionate violinist Louisa is prepared to be resentful. But life at the family’s remote camp in the Tasmanian rainforest is intriguing, to say the least. There are pig-footed bandicoots, scary spiders, weird noises and odors in the night, and a quirky boy named Colin who cooks the most amazing meals. Not the least strange is her Uncle Ruff, with his unusual pet and veiled hints about something named Convict Rock.

Finally, Louisa learns the truth: Convict Rock is a sanctuary established by her great-grandmother Eleanor—a sanctuary for Tasmanian tigers, Australia’s huge marsupials that were famously hunted into extinction almost a hundred years ago. Or so the world believes. Hidden in the rainforest at Convict Rock, one tiger remains. But now the sanctuary is threatened by a mining operation, and the last Tasmanian tiger must be lured deeper into the forest. The problem is, not since her great-grandmother has a member of the family been able to earn the shy tigers’ trust.

As the summer progresses, Louisa forges unexpected connections with Colin, with the forest, and—through Eleanor’s journal—with her great-grandmother. She begins to suspect the key to saving the tiger is her very own music. But will her plan work? Or will the enigmatic Tasmanian tiger disappear once again, this time forever?

A moving coming-of-age story wrapped up in the moss, leaves, and blue gums of the Tasmanian rainforest where, hidden under giant ferns, crouches its most beloved, and lost, creature.

Michelle Kadarusman is a multi-award-winning author of middle-grade novels, including Music for Tigers, The Theory of Hummingbirds, and the Governor General’s Award finalist Girl of the Southern Sea. Born in Melbourne, Australia, Michelle has also lived in Indonesia and Canada; today she splits her time between Toronto, Canada, and Byron Bay, Australia. Room for More, Michelle’s first picture book, was inspired by Australian wildlife sheltering in wombat burrows during the devastating Australian bush fires of 2019–2020.

Praise for Music for Tigers

? STARRED REVIEW “A stirring tale that will inspire young readers to take to heart our collective responsibility as stewards of the planet, Music for Tigers is a coming-of-age story with a conservation twist.”—Foreword Reviews Starred Review

? STARRED REVIEW “In her third outstanding middle-grade novel – after Theory of Hummingbirds and Girl of the Southern Sea – Kadarusman continues to be a clear, insightful, and humourous guide to unfamiliar experiences and settings, and in this case species. She’s unearthed the fascinating history of an extinct animal and entwined it with a heartfelt story of a dedicated family whose good deeds have run up against the ever-encroaching, commerce-driven modern world.”—Quill & Quire Starred Review

“Author Michelle Kadarusman deftly incorporates Australian history into this middle-grade book that reads like a love letter to the unique flora and fauna of the Tasmanian Tarkine….Music for Tigers is perfect for young readers interested in ecology and preservation.”—Booklist

“A well-told and timely story, which gently but firmly addresses topics such as environmental impact, endangered species, neurodiversity, friendship, bullying, and being your best self....A solid choice for middle grade collections providing a balanced and comprehensible voice to the environmental discussion for young people.”—School Library Journal

“Verdict: Students who enjoy nature stories, especially those who are interested in cryptid species, will enjoy this book….This character and setting driven plot appeals on many levels and introduces a setting not well represented in children’s books in the United States. I recommend it for middle school and public libraries.”—Oregon Coast Youth Book Preview Center

“[P]rovides an uncommon but insightful blending of science and art….[A] fun, engaging read for middle grade children, one that will appeal to many different readers because of its diverse themes and subjects. Louisa’s relationships with Colin and Rufus are delightful to read, and the novel covers important topics with delicacy and grace. Music for Tigers is a heartwarming story of personal growth and friendship that will draw readers in with its charm. Highly Recommended.”—CM Magazine

“There is art within the pages of Music for Tigers....Music for Tigers is a statement, albeit a songful one, of our impact on the natural world for our own purposes, destroying critical habitats and species. It implores us to step up and put conservation and preservation measures in place...”—CanLit for LittleCanadians

“This captivating story is full of heart, hope, music, and science….Music for Tigers is a special coming-of-age story that pays homage to Tasmanian aboriginal people, nature, and the magnificent beings with whom we share the earth.”—Christina Ammirati

“Kadarusman weaves beautifully themes and issues such as environmental fragility and protection, understanding and respecting neurodiversity differences, reverence for family and history and more into an engaging and at times suspenseful storyline….Music For Tigers is uniquely good and genuine, truly ‘fair dinkum’…!”—Book Gaga

Other titles by Michelle Kadarusman

Girl of the Southern Sea

The Theory of Hummingbirds