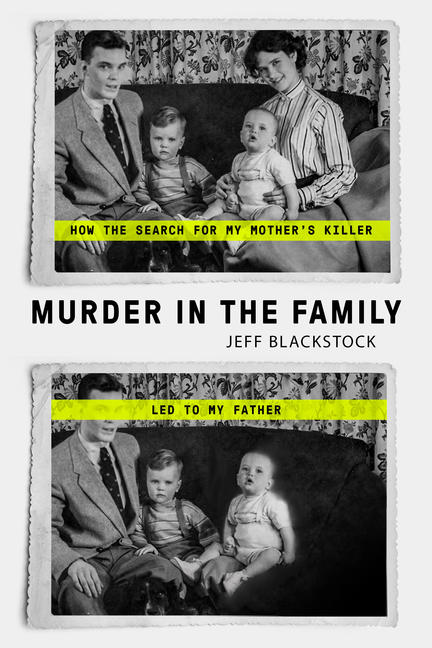 "I think that my father murdered my mother."

That terrible belief spurs author Jeff Blackstock to investigate the circumstances of his mother Carol's death when he was a child. Carol Blackstock died at age 24 in 1959--poisoned by arsenic--but the cause of her death remained shrouded in mystery for decades. Jeff's father George Blackstock was a career diplomat in Canada's foreign service, posted to glamorous Buenos Aires with his wife Carol and their three children. A little more than a year after the family's arrival, the vivacious young mother, now emaciated and in terrible pain, was transferred to Montreal for treatment of a mysterious illness that proved fatal. In the following year, George Blackstock remarried, and a young woman named Ingrid became the feared stepmother to Jeff and his two siblings.

Carol's parents soon had suspicions about their son-in-law George but were unable to get justice for their daughter. Class privilege--George was the scion of a Toronto establishment family and Carol was from modest beginnings--and an aversion to scandal all figured in an apparent cover-up. But secrets have a way of eventually disrupting all families. A damning autopsy report about arsenic poisoning, found among their grandmother's effects, leads Jeff Blackstock and his sister to horrifying revelations about their father. Eventually, they confront him and accuse him of their mother's murder. But George offers only vague explanations that don't add up. George died a broken man, mostly abandoned by his adult children.

A compelling story of a high-society murder, a heartbreaking tale of emotionally neglected children, and an inquiry into the power and privilege of the Anglo upper classes of the time, Murder in the Family chronicles the shocking legacy of deeply buried secrets and betrayal in one's own family.

JEFF BLACKSTOCK was born in Toronto, and as a child in a foreign service family he lived and was schooled in Argentina, New Orleans, and Switzerland, as well as Canada. A lawyer by training, he has degrees in English literature from the University of Toronto and the University of Kent at Canterbury, England. His career as a Canadian foreign service officer included postings abroad in Costa Rica, Australia, and Saudi Arabia. Now retired, he and his wife divide their time between Merida, Mexico; Kingston, Ontario; and Portland, Maine.

Praise for Murder in the Family:

“Murder in the Family hit all the high notes: a dogged investigation, a true murder mystery, and a sense of time and place that only someone who lived it—Jeff Blackstock—could achieve. A page-turner that keeps you guessing to the very end.”
—Kevin Donovan, author of The Billionaire Murders

“I don’t know which shocked me most in Jeff Blackstock’s account of his mother’s mysterious death: the cold blooded actions of his father, or the deafening silence of the Canadian diplomatic service. He writes in a measured tone without anger or blame, which makes the story all the more chilling.”
—Carol Hay, Writer/Producer Frankie Drake, Murdoch Mysteries

“This fascinating book provides captivating insight into family dysfunction in the aftermath of a mysterious death, likely a murder. It answers that oft-posed question, ‘What were they thinking?’ with a compelling portrait of family members in denial—until they weren’t.”
—Ann Brocklehurst, author of Dark Ambition: The Shocking Crime of Dellen Millard and Mark Smich

“In this intriguing book, Jeff Blackstock relates the tragic events that led to his mother’s death and later the devastating conclusion that his father, George, was responsible. With his superficial charm, lack of empathy or remorse, and ability to lie convincingly, George demonstrated the classic core features of a criminal psychopath. A great read.”
—Dr. John M.W. Bradford, internationally renowned forensic psychiatrist, recognized for his work on the Bernardo, Pickton, and Russell Williams murder cases
“In [Murder in the Family], Blackstock, a 69-year-old retired Canadian diplomat, presents—in the meticulous language of his profession—a convincing account of how and why his mother died. . . . [He] lays out facts but leaves the conclusion unspoken.”
—Maclean’s
“[N]o reader will want to put [Murder in the Family] down. . . . This is a fine true crime book.”
—The Globe and Mail
“[A]n incredibly interesting story. . . . Blackstock’s research is original. . . . Even for those who aren’t true crime fans, Blackstock’s personal connection to the story makes the book feel like a heartbreaking memoir at times, rather than a true crime story. It is a very worthwhile read.”
—Foreign Service Magazine