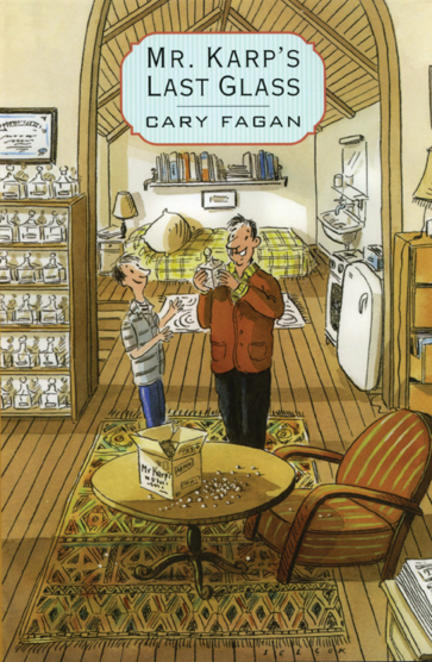 Young Randolph has two favorite pastimes -- hockey and collecting. When his family rents out part of their house, Mr. Karp takes over two rooms on the third floor, and Randolph soon learns that the new boarder is a collector too.

It turns out that Mr. Karp collects water -- samples that he keeps in glass containers, each one carefully labeled: Ditch water from St. Louis, Missouri, after the tornado of 1896. Pitcher used by Benito Mussolini to throw water in face of army private during tantrum, 1941. Randolph is astonished to learn that Mr. Karp is just one of many water collectors, and the only thing preventing him from being the foremost water collector in his region is a rival named Ravelson. To beat Ravelson, Mr. Karp heads to Japan to obtain a unique sample -- melted snow taken from the upturned hat of Napoleon Bonaparte during the Russian campaign.

Selcuk Demirel was born in Artvin, Turkey, in 1954. He moved to Paris in 1978 and still lives there. Visit Selcuk Demirel's website: http://www.selcuk-demirel.com/

...the only prerequisite for enjoying Mr. Karp's Last Glass is an ability to read, whatever your age...There is an internal consistency and believability that will draw readers along, most often with a smile on their faces...Cary Fagan has created an entertaining, imaginative, and fun story that will appeal to a wide audience for many years.

[Mr. Karp's Last Glass reads] almost like a younger reader's Brian Doyle. The writing is sharp, witty and quirky, featuring both pointed narrative and almost obsessive detail, like any good collector...And the list of water origins is both hilarious and educational in a fun way...This book is sure to bring a smile to any thoughtful young boy or girl and pique the sense of humour of anyone to whom it is read aloud. Highly Recommended.

The two things that Randolph enjoys most in life are hockey and collecting. When his family rents out part of their house to Mr. Karp, Randolph learns Mr. Karp is a collector, too. But what does he collect? Stamps? Spoons? Shrunken heads? Randolph decides he must find out.

Other titles by Selcuk Demirel