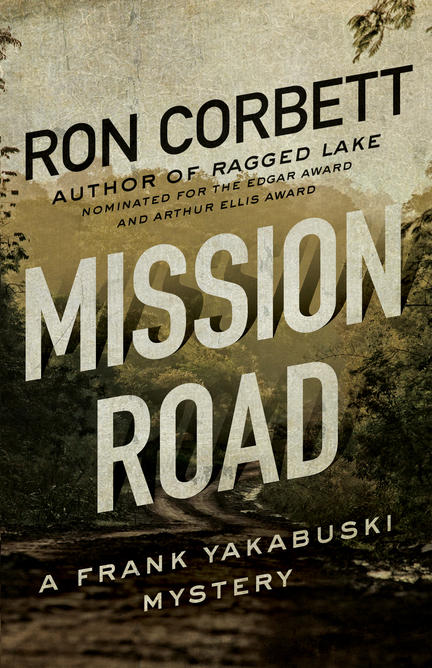 In the final scene of Cape Diamond, millions of dollars’ worth of diamonds went missing, which is where Ron Corbett’s latest novel begins. When rumors spread that they were buried on Mission Road, an old logging trail outside the town, people swarm to the area, setting up temporary camps and searching for fortune. But when a known murderer shows up, the real mystery begins.

Detective Frank Yakabuski must juggle a 21st-century diamond rush, killers on the run, and his ex-cop dad, in this third book in the series.

Ron Corbett is a writer, journalist, and broadcaster whose writing has won numerous prizes, including two National Newspaper Awards. Previously, he published the books The Last Guide and A Grand Adventure. Corbett has taught journalism at Carleton University and has worked for the Ottawa Citizen, the Ottawa Sun, and CHUM Radio. He lives in Manotick, Ontario.

Frank Yakabuski looked at the man sitting the other side of the kitchen table and couldn’t decide what to think of him. Calvin Jayne. Forty-eight years old. Drove cab for Shamrock Taxi, a mill-hand before that. Lived in a one-bedroom walk-up on Derry Street. No signs of a wife or children. Cases of Old Milwaukee – cheapest beer at most dépanneurs – stacked by the back door.

Jayne wore grey sweat-pants and a rib-tee-shirt that didn’t cover his stomach, short enough to show three rolls of pale, mid-winter skin and tufts of sweaty, black hair. It was too hot in the apartment. He was overcompensating, although the cabbie wasn’t the only one doing that. Although winter had been late arriving on the Northern Divide, when it came it was bitter cold. The salt trucks couldn’t run most days because of the cold and there was black ice everywhere. Highway fatalities were common. So were animals you’d see in the morning, standing in some distant field with fog swirling around them, scrawny black bear, teetering moose, beasts awoken from their hibernation and not sure what to do next.

It was a winter for ill-fated wonders. The first fortune hunter arrived the second week of February. His name was Jason McAllister and he was a post-graduate mathematics student from Syracuse University who checked into the Grainger Hotel after arriving on a direct flight from Toronto. Because he showed no sign of needing to be in Springfield — he didn’t check in with the gear of a hydro worker or a tree-marker; didn’t seem to be looking for work at the saw mills or the truck yards – he was noticed.

During the next two days McAllister was seen shopping at Murphy’s Sporting Goods, where he purchased packets of dehydrated food and some propane tanks. And the Stedman’s department store, where he purchased wool socks, long underwear and several toques. He used the business suite on the second floor of the Grainger several times, where there was free wi-fi. Many of the staff in the hotel recall him working on a laptop.

On his third day in Springfield he checked out of the hotel and took a cab to the parking lot of the Mission Road trailhead. His mother reported him missing two days later.

“Yakabuski, a senior detective in the Springfield Regional Police Service, stands tall throughout as he investigates kidnapping, murder, extortion, and more.” — Publishers Weekly

“This third book in Ottawa journalist Ron Corbett’s excellent Frank Yakabuski series is the best so far. It combines Canadian history with great characters and a modern take on an old plot . . . Corbett does his subject and his characters, lots of them, proud.” — The Globe and Mail

Other titles by Ron Corbett