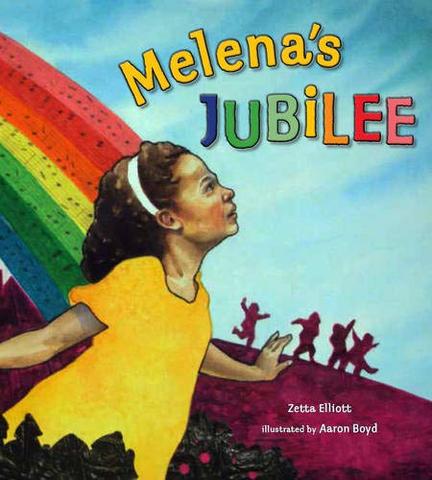 First time in paperback!
“I write predominantly about Black children because I grew up believing I was invisible in the real world, and it hurt just as much to discover that I was also invisible in the realm of the imaginary. I write the books I wish I had had as a child.” —Zetta Elliott
Forgive and be forgiven. It sounds so appealing—why doesn’t it happen every day? Finding herself forgiven on a rain-scrubbed morning after a difficult day, Melena seizes her fresh start and shares the song in her heart with her family and friends. It’s a day of new beginnings. It’s Melena’s jubilee. Melena is thoroughly appealing and so is this Own Voices story.

Born in Canada, Zetta Elliott moved to Brooklyn in 1994 to pursue her PhD in American Studies at NYU. Her poetry has been published in several anthologies, and her plays have been staged in New York, Chicago, and Cleveland. Her essays have appeared in Horn Book Magazine, School Library Journal, and The Huffington Post. Her first picture book, Bird, won the Honor Award in Lee & Low Books' New Voices Contest; it was named Best of 2008 by Kirkus Reviews, a 2009 ALA Notable Children's Book, and BIRD won the Paterson Prize for Books for Young Readers. Elliott's first young adult novel, A Wish After Midnight, has been called "gripping," "a revelation...vivid, violent and impressive history." Ship of Souls was published in February 2012; it was included in Booklist's Top Ten Sci-fi/Fantasy Titles for Youth and was a finalist for the 2013 Phillis Wheatley Award. Her latest novel, THE DEEP, was released in November 2013. She has published several illustrated books under her own imprint, Rosetta Press. She currently lives in Brooklyn.
Learn more at: http://www.zettaelliott.com/

Aaron Boyd has illustrated numerous picture books, including Calling the Water Drum, Janna and the Kings,and Babu's Song for Lee & Low Books, as well as the chapter book The Story of Civil Rights Hero John Lewis. His work has been recognized by the Children's Africana Book Award and the International Literacy Association (ILA). He lives with his wife, son, and dog in Milwaukee, Wisconsin. You can visit him online at aaronboydart.blogspot.com.

Other titles by Zetta Elliott

A Place Inside of Me

A Poem to Heal the Heart

by (author) Zetta Elliott
illustrated by Geneva B

Dragons in a Bag

by (author) Zetta Elliott
illustrated by Geneva B

A Wish After Midnight