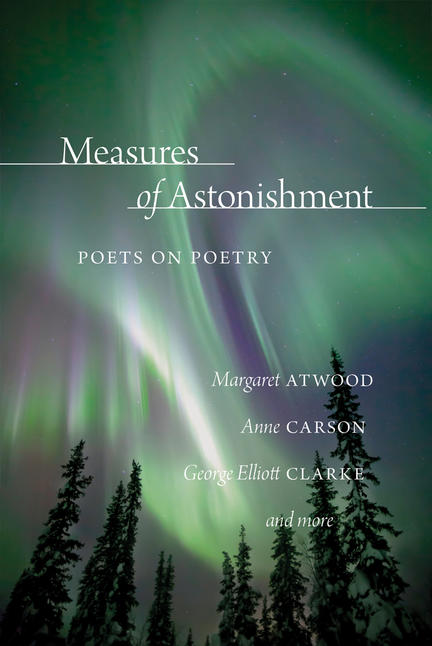 "A society without poetry and the other arts would have broken its mirror and cut out its heart."
-Margaret Atwood

So boldly insists one of our greatest writers in Measures of Astonishment, a refreshing and eclectic mix of both deeply personal and formal essays that offer a glimpse into the minds of some of Canada’s most influential poets. In addition to Margaret Atwood, the contributors to this volume include a virtual who’s who of the country’s literary elite: Anne Carson, George Elliot Clarke, Anne Simpson, Tim Lilburn, Marilyn Bowering, Mark Abley, Glen Sorestad, Robert Currie, and Don McKay.

These writers each forward their own perspectives on the art and craft of poetry reminding us, as Tim Lilburn states, that all poetry "is the theatre of feeling," and, as Don McKay declares, that "poetry--any poetry--is always political and subversive," because it turns the tool of language "against itself." Following on this notion, Mark Abley argues that while all poets have their unique voice and vision, what binds them is that none are "afraid to demonstrate the energy of language and the sterling power of the human imagination." The energy of language and the human imagination are recurrent motifs throughout this volume.

Measures of Astonishment shines a northern light on poetry, offering unique perspectives as to what poetry is, what it does, and why it matters.

One of Canada's most revered poets, Glen Sorestad has been writing for over 30 years from his Saskatchewan home. Also the co-founder and president of Thistledown Press, he helps to expose the talent of emerging western poets. Sorestad's work has appeared in countless journals across Canada, in the United States, Australia and Europe. Recently one of his stories was produced for the Bravo! cable network and another was broadcast on CBC Radio One. He holds a master's degree in education and has edited many short story and poetry anthologies.

Other titles by Glen Sorestad

Blood and Bone, Ice and Stone

Today I Belong to Agnes

Other titles by League of Canadian Poets

by (author) League of Canadian Poets

by (author) League of Canadian Poets