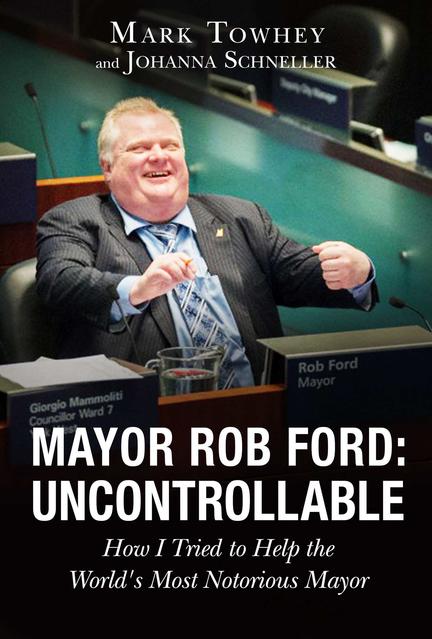 Rob Ford?the most ridiculed and scandal-ridden mayor?is an international celebrity. When the photo of him smoking crack cocaine circulated, garnering billions of hits, it was the icing on the cake. Ford, not just the favorite buffoon of late-night comics and journalists, was also a known alcoholic and the subject of legal, political, and police investigations'stripped of his mayoral powers by Toronto’s City Council and a star subject in a murder investigation.

Here for the first time, Ford’s former chief of staff Mark Towhey, who tried to wrangle Ford during his highly public meltdown, comes clean, filling in incredible behind-the-scenes details previously unknown and providing invaluable context. With this highly anticipated and much-talked-about tell-all, we go deep into Ford’s personal life, including his addictions and his rivalry with his brother; we watch him as he runs Toronto; we overhear hair-raising late-night phone calls and see private, after-hours events; and we also get the much-gossiped-about but little-known account of Towhey’s desperate struggle to protect the mayor from himself.

This juicy read is, like Ford, political candy, but it doesn’t expose Ford for the sake of ridicule?it empathizes with him and explains him. It provides a fascinating portrait of twenty-first-century urban politics, as well as a character study of a larger-than-life personality, a mayor so colorful that he remains in office as a councillor and?despite it all?may one day become mayor again.

Mark Towhey joined Rob Ford’s mayoral campaign in 2010 and, after Ford’s election, served as his chief of staff from August 2012–May 2013.

Johanna Schneller writes for publications such as The Globe and Mail, Vanity Fair, GQ, and Toronto Life. The Toronto Film Critics Association named her “one of North America’s leading freelance journalists."

Other titles by Johanna Schneller