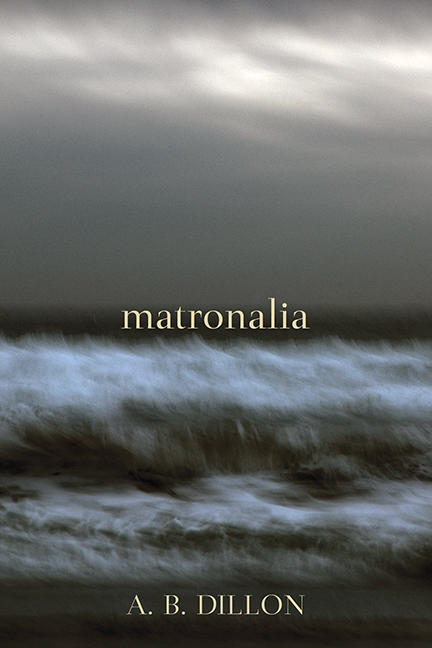 A mother reveals a festering secret to her daughter after years of trying to conceal it. Since her daughter’s birth, she has been suffering from a disease that causes bizarre symptoms: sudden calcification, the growth and disintegration of extra ribs, coral splinters in the heart, unrelenting depression. As the mother examines the pathology of her disease, she offers her daughter fierce and harrowing advice on everything from sex to survival to love.

A mother is a recorder, a journal, an illimitable, constant aperture. We are seers, voyeurs of the worst order.

Part ode, part prayer, and part manifesto, Matronalia interlaces ancestral legacies and personal tribulations to reveal what often remains unsaid from mother to daughter. The energy, intelligence and grace of the language and imagination is itself antidote to the dilemmas and shame they explore. Matronalia is, in essence, a confession that evolves into a love poem.

Go to art when you are lost, my darling. Stand before something that breaks you.

A. B. Dillon was born in 1968 in Owen Sound, Ontario. She now lives in Calgary, Alberta, where she devotes her time to writing and counselling. Her poetry has been featured in FreeFall, Café Beano Anthology and the Calgary Herald. She has also been published in Swerve, Avenue Magazine and Where Calgary. This is her first collection of poetry.

Inverting the usual idea of a celebration of childbirth and motherhood, Dillon’s poems examine another dimension of motherhood that is rarely explored. Using poetry’s powerful, emotional triggers, Dillon creates a mother’s point of view that is central and immediate through her acute powers of observation and her intense imagery. From the very first poem we bear witness as a mother offers fierce counsel to her daughter to atone for a festering secret. Personal and congenital mythologies reticulate like Celtic knot work, revealing in fragments what she has tried in vain to suppress — a malaise of the heart and a hereditary disease, eased only in confessing its pathology to her daughter.

In their tone and vivid imagery, as well as emotional precision, these poems are reminiscent of the mother poems of Sharon Olds and Sylvia Plath, with the grieving defiance of Gwendolyn Brooks. Uniquely, A. B. Dillon locates this specific mother’s tribulations in an ancestral context: the pains, joys, and failures are not only of her time but of every time before.

Other titles by A.B. Dillon