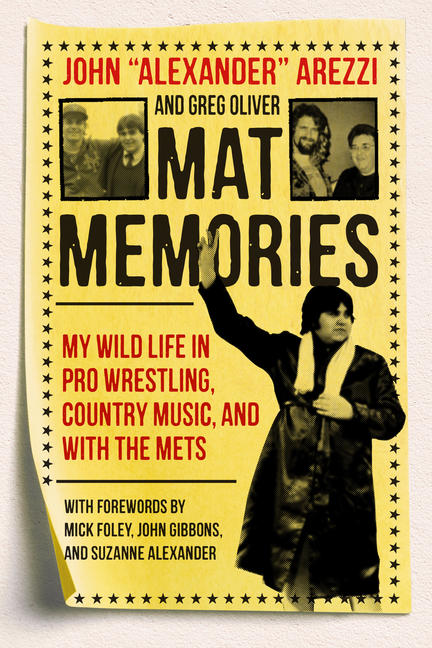 A man with three different names ties together the stars of professional wrestling, country music, and the New York Mets.

John Arezzi was a lifelong Mets fan who dreamed of a job in baseball. In 1981, he took a job with the Mets Class A team in North Carolina. But Arezzi had another love: professional wrestling. He ran a fan club for the villainous “Classy” Freddie Blassie as a teenager, then progressed to wrestling photographer, and finally even stepped into the ring himself as John Anthony. Eventually he escaped to pursue a new life in altogether different world: country music. After adopting a new name, John Alexander, his many accomplishments include discovering both Patty Loveless and (decades later) Kelsea Ballerini. But wrestling is tough to shake …

In the 1990s, Arezzi hosted the pioneering radio talk show Pro Wrestling Spotlight. He also ran the first major conventions, assembling a wrestling who’s who to meet with fans. He promoted shows, both at home and abroad, and was a key figure behind importing lucha libre into America.

Mat Memories is Arezzi’s chance to hold the mic, and he holds nothing back — he names names and tells the untold behind-the-scenes stories: from the ring, the stage, and the diamond.

A writer, editor, and stay-at-home dad, Greg Oliver has written extensively about hockey and professional wrestling. Recent books include Blue Lines, Goal Lines, & Bottom Lines; Don’t Call Me Goon; The Goaltenders’ Union; Written in Blue & White; and Duck with the Puck. A member of the Society for International Hockey Research, Greg lives in Toronto, Ontario, with his wife and son. Learn more at OliverBooks.ca. Jim Gregory is a vice-president with the NHL and was inducted into the Hockey Hall of Fame in 2007.

When my alarm clock goes off, and I eventually drag myself out of bed, I always take a moment to consider who I will be today.

Am I John Arezzi, the pioneering pro wrestling radio journalist, who hosted an influential show, Pro Wrestling Spotlight, in New York City in the late 1980s until the mid-’90s? The one who promoted wrestling shows across the U.S., and in southeast Asia and South America, featuring lucha libre stars before it was trendy. The one that was hated by Vince McMahon for an outspoken crusade for details of the WWF’s steroid issues and sex scandals. I’m also the one who helped Vince Russo get into the business, which I’ll never be forgiven for by some people.

Or am I John Alexander, the respected music business executive in Nashville, with ties to many names in country music? You know, the one who discovered the incredibly talented Patty Loveless in a dive bar in Shelby, North Carolina, and started her on the path to stardom. Or more recently, the one who opened the doors for Kelsea Ballerini, which she proceeded to kick down and rise to the top of the industry. You’ll find my LinkedIn profile under that name.

I do know for certain that I am no longer John Anthony, professional wrestler. He called it quits after two ludicrous matches, his vanity and curiosity winning out over sanity. John Arezzi, promising baseball executive, is also long in my past, though my love for all things about the New York Mets continues through thick and mostly thin.

What I do know each and every morning is that each day will bring something new and unique. Don’t believe me? Read on.

“John is a believer. He takes chances on people he believes in. I should know. For whatever reason he believed in me and put my show Headline Country on TV for 14 years. He’s an underdog’s best friend. Whether it’s baseball, wrestling or country music, he smells potential and opportunity like a bloodhound.” — Storme Warren, Sirius XM “The Highway”

“John Arezzi’s adventures in wrestling assure him a place in history. A pioneer of wrestling radio shows, the father of the modern fanfest/all-star convention, and even a wrestler himself, albeit briefly, John has a multitude of experiences and stories pertaining to his love of and participation in pro wrestling. I’ve even forgiven him—almost—for being responsible for letting loose wrestling’s greatest plague on an unsuspecting citizenry. What plague you ask? Read the book and see if he admits it!” — Wrestling personality Jim Cornette

“John Arezzi was there for the superfan of Pro Wrestling. From his radio show in NYC, to the Weekend of Champions conventions, he just knew what hardcore fans wanted. Then he just disappeared and I always wondered what happened to him. I never forget the people that were good to me on my way up and I'll always be grateful to John, who was one of those who was so good to me. That’s why I was excited to see John back on the scene and wanting to share his story with everyone. I'm really looking forward to John's book!” — Two-time WWE Hall of Famer Sean Waltman, a.k.a. Xpac

“This book is inspiring as it’s rooted in John’s character and offers life lesson after life lesson. Here’s an example: During my walk halfway across America to raise awareness for foster children aging out of foster care into homelessness, John enlisted his contacts and resources to facilitate a sponsorship with Red Roof Inn so my support car driver would have a place to stay each night — free of charge. John never mentioned it to me during the seven-month, 1,700 mile walk. I only learned he did this years later.” — New York Times Bestselling Author and Country Music Artist Jimmy Wayne

“John Arezzi was a wrestling superfan, which led to his many accomplishments in the business. He’s done it all! From newsstand magazine ringside reporter in the 1970s, to promoting the first wrestling conventions in the 1990s, to starting the talks to bring AAA Lucha’s foray into the United States, and helping bridge the relationship between AAA and ECW, John is first class. This book tells it all.” — Lucha Libre Legend Konnan

Other titles by Greg Oliver

Father Bauer and the Great Experiment

The Genesis of Canadian Olympic Hockey

Hockey Contracts and Historical Documents from the Collection of Allan Stitt

Written in Blue and White

Shocking Stories from the Squared Circle