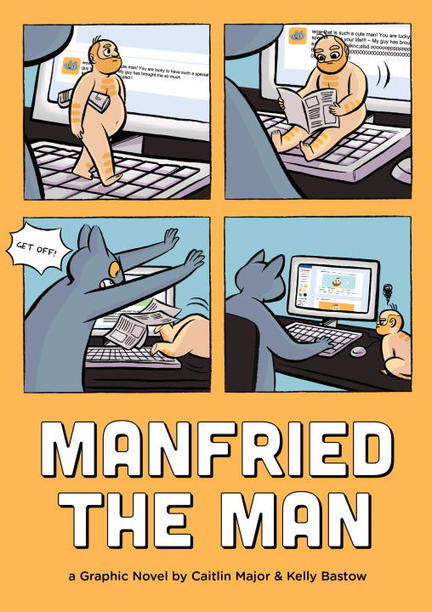 In this hilarious graphic novel, the roles of cats and humans are reversed, putting humanoid felines in charge of tiny, dimwitted little man-pets.

Manfried the Man was named one of the Best Comics of 2018 by A.V. Club and Paste

Meet Manfried, a stray man taken in by the likable but introverted tomcat Steve Catson. Stuck in a dead-end job and bemoaning a nonexistent love life, Steve depends on his pet man for friendship and support. But when Steve’s carelessness results in Manfried getting lost, Steve has no choice but to muster his meager resources to bring his best friend home safe. Can a cat who can’t even clean up his own apartment manage to find his missing man before it’s too late? In an all-new series based on the wildly-popular tumblr webcomic, classic comic strip layouts and colorful cartoon art make this a fun read. It’s a great gift for comics fans, pet owners, cat lovers, or anyone who appreciates a story full of humor and adventure, with a sweet friendship at its heart.

Caitlin Major, creator of Manfried, is a Toronto-based comics writer and illustrator. Her webcomics include Home Sick, Peach Plum Pear, Yer a Witch Milly, and The Spirit and the Spider. Caitlin works as an animation compositor at Skyship Entertainment, an animation studio in Toronto that specializes in kids’ programming.

Kelly Bastow is a comics creator and commercial illustrator. She illustrated Quirk Books’ The Fangirl’s Guide to the Galaxy and has drawn for the comics Lumberjanes, Adventure Time, and Capture Creatures. She self-published the graphic novel Wax and Wane (coloring by Caitlin Major), and her 2017 autobiographical comic, Year Long Summer, was nominated for an Ignatz Award.

“A simple tale of affection, devotion, and worry...though its narrative beats are familiar, that makes them no less adorable.”—Vulture

“There’s something in this story that can resonate with everyone - even if you’re more of a dog person.”—Newsarama

“Anyone who loves their pets as much as (or more than) they do other humans will happily read it cover to cover.”—Philadelphia Life

“A delightful twist on the human/cat relationship.”—Library Journal
“An entertaining and often laugh-out-loud twist on reality.”—Foreword Reviews

“A surprisingly sweet story about companionship.”—Publishers Weekly
“Joyous and utterly delightful.”—Storgy magazine
“Major and Bastow have a keen eye for details and a lot of the humor comes because they have thought things through to their logical and hilarious conclusions...But also because the life of Steve Catson is so sensitively drawn, and reminds us of people we know, or including ourselves.”—Sequential Tart

Other titles by Caitlin Major