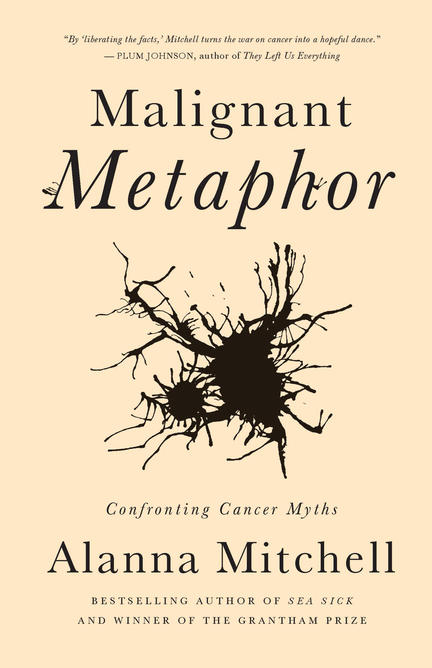 An unprecedented take on cancer and recovery

Winner of the Lane Anderson Award for Science Writing

“Mitchell does a convincing job sorting fact from fiction, diffusing fear, and challenging the manipulative language of fundraisers who aim for pocketbooks rather than intellectual honesty . . . Mitchell’s research is rooted in science, while her writing remains grippingly personal.” — Quill & Quire

Alanna Mitchell explores the facts and myths about cancer in this powerful book, as she recounts her family’s experiences with the disease. When her beloved brother-in-law John is diagnosed with malignant melanoma, Alanna throws herself into the latest clinical research, providing us with a clear description of what scientists know of cancer and its treatments. When John enters the world of alternative treatments, Alanna does, too, looking for the science in untested waters. She comes face to face with the misconceptions we share about cancer, which are rooted in blame and anxiety, and opens the door to new ways of looking at our most-feared illness.

Beautifully written, Malignant Metaphor is a touching and persuasive book that has the power to change the conversation about cancer. Clear-eyed and compassionate, Mitchell opens the door to new ways of looking at our most-feared illness.

JOHN GEIGER is a co-author of the international bestseller Frozen in Time: The Fate of the Franklin Expedition and the author of six other works of non-fiction, including The Angel Effect and The Third Man Factor: Surviving the Impossible. His work has been translated into fourteen languages. Geiger is chief executive officer of The Royal Canadian Geographical Society and Canadian Geographic Enterprises, and a fellow of The Royal Geographical Society. He is also a senior fellow at Massey College in the University of Toronto.

ALANNA MITCHELL is an internationally award-winning science journalist and author whose latest bestseller is Sea Sick: The Global Ocean in Crisis. She has recently transformed the book into a one-woman play and is performing it across Canada. In 2014, the play was nominated for a Dora Award. She is a contributor to CBC Radio’s Quirks & Quarks and freelances for Canadian Geographic magazine and The New York Times. She has travelled to each continent and most parts of the ocean doing research and giving talks on marine science.

THE HONORABLE LEONA AGLUKKAQ is the member of Parliament for Nunavut. In 2008, following an extensive career in government, she became the first Inuk to be sworn into the Federal Cabinet, as the Minister of Health. She now serves as Minister of the Environment, Minister responsible for Parks Canada, Minister of the Canadian Northern Economic Development Agency, and Minister of the Arctic Council for Canada. Ms. Aglukkaq was raised in Thom Bay, Taloyoak and Gjoa Haven.

“Anyone fearing cancer (probably most of us) will find relief in this compelling book; it’s like having a well-informed friend by your side, helping you dodge free radicals. By ‘liberating the facts,’ Mitchell turns the war on cancer into a hopeful dance.” — Plum Johnson, author of They Left Us Everything

“Mitchell does a convincing job sorting fact from fiction, diffusing fear, and challenging the manipulative language of fundraisers who aim for pocketbooks rather than intellectual honesty … Mitchell’s research is rooted in science, while her writing remains grippingly personal.” — Quill & Quire

“In addition to her clear medical explanations, Mitchell’s compassionate attitude will bring comfort to those readers and their loved ones facing a cancer diagnosis.” — Publishers Weekly

“We have all been touched by cancer in one form or another. We’ve all crafted our own bespoke way of coping with its impact. I think we’d all do well to approach it with the openness and candour Mitchell brings to the table.” — Globe and Mail

“Alanna Mitchell’s admirable Malignant Metaphor: Confronting Cancer Myths joins a series of thoughtful writings about the most reviled disease … Interwoven through an elegant and readable account of the biology and history of cancer — frequently citing Mukherjee — is this much more personal and emotional story of terror and the need to take charge of one’s own destiny.” — Literary Review of Canada

Other titles by Alanna Mitchell

The Force that Created the Modern World and Could Destroy It

The Historic Discovery of HMS Erebus

The Global Ocean in Crisis