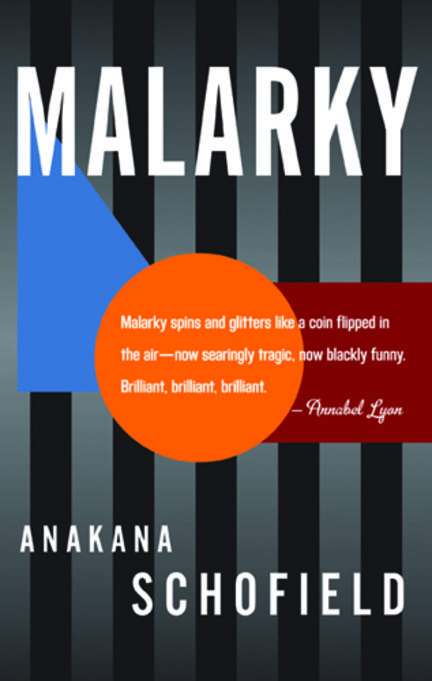 When Our Woman catches her son in the hay with another man and is soon after accosted by Red-the-Twit about her own husband''s supposed infidelity (and strange sexual predilections), she embarks on an odyssey through grief and madness toward the realization of something all-too-human. Brilliantly drawn with the cadences of rural Ireland, Malarky is a wickedly funny and original tour-de-force.

"This is the story of the teapot-wielding ''Our Woman'': fretful mother, disgruntled farmwife, and - surprisingly late in life - sexual outlaw/anthropologist. Everything about this primly raunchy,uproarious novel is unexpected, each draught poured from the teapot marks another moment of pure literary audacity." - Lynn Coady, author of The Antagonist

Our Woman will not be sunk by what life's about to serve her. She's caught her son doing unmentionable things out by the barn. She's been accosted by Red the Twit, who claims to have done things with Our Woman's husband that could frankly have gone without mentioning. And now her son's gone and joined the army, and Our Woman has found a young fella to do unmentionable things with herself, just so she might understand it all. Malarky is the story of an Irish mother forced to look grief in the eye, and of a wife come face-to-face with the mad agony of longing. Comic, moving, eccentric, and spare, Anakana Schofield's debut novel introduces a brilliant new voice in contemporary fiction.

FURTHER PRAISE FOR MALARKY "Good writing and dark wit always excite me and they come together thrillingly in this book. It has a quiet grip on the strangeness of the interior and exterior worlds of love and politics. I delighted in the writing and the scope." - Jenny Diski, author of What I Don''t Know About Animals

"Anyone bold enough to name her book after a word so loaded deserves our attention. In Malarky Schofield pulls her long line tight and lets go when we least expect it." - Michael Turner, author of Hard Core Logo

Anakana Schofield is part of a new wave of wonderful Irish fiction--international in scope and electrically alive. -Colum McCann

"Malarky" is a terrific read, a brilliant collision of heartbreak and hilarity written in a voice that somehow seems both feral and perfectly controlled. Anakana Schofield's Our Woman takes a cool nod at Joyce, then goes her own way in one of the most moving and lyrical debut novels I've read. - Jess Walter

"This is a remarkably different novel. It is laugh out loud funny and sadly real. It is perceptive and revealing. It is raunchy. It is literate with no shades of gray. The protagonist, cleverly named Our Woman," is sui generis; you will not find her ilk anywhere. Hers is a voice we have not heard before and may not hear again." - About.com

"I loved this book from its opening lines... Schofield's strong beautiful prose is compelling." - Freefall Magazine

"Schofield's portrait of a woman whose personality is beginning to fragment after a lifetime in an emotional vacuum is both blackly comic and deeply felt. There is something heroic about the desperate resilience of Our Woman, and the originality of her depiction by Schofield, that leaves an indelible trace on the reader's mind." - Jane Schilling, The Telegraph

Brilliant... laced with dark wit and quirky lyricism, this is a striking portrait of a society in flux and a woman on the edge - The Mail

"The best writers...manage to balance comedy and tragedy, to combine the verbal virtuosity and high jinks of the comic vision with intelligent and sensitive insight into people's lives and hearts. And Anakana Schofield is in the ranks of the best. She weaves her words well and demonstrates many of the gifts that the novelist has to own. This novel is deeper and more thoughtful than it seems. Clever, witty, imaginative and intriguing, Malarky is a stunning debut from an exceptionally good writer." - The Irish Times

"One of the delights of this novel is the language in which it is written. The tender inflections of everyday Irish speech...seem to break into a jig, dancing to and fro... I found in 'Malarky' a refreshing rejection of the escapist fantasy that dominates much of our cultural life: it is boldly not fifty shades of anything. I admire Schofield's ability to pull off something so difficult with charm and brio. - The Guardian

Other titles by Anakana Schofield

A Novel in Warnings

Surviving in the Hour of Darkness

The Health and Wellness of Women of Colour and Indigenous Women

A Whisper to a Scream: Books with Compelling Narrative Voices

"It is not just what is being said, but how."