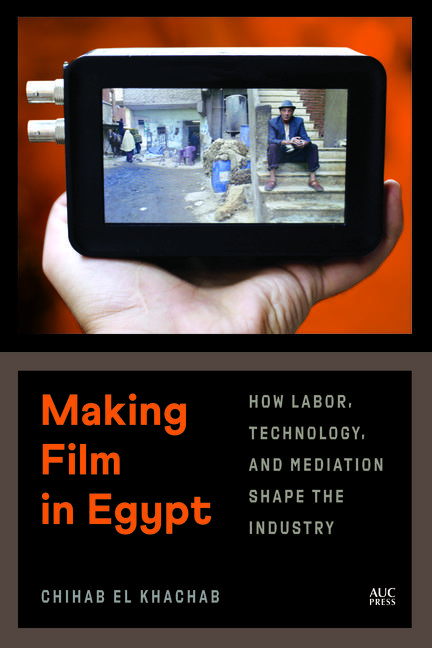 An ethnographic study of the Egyptian film industry

The enormous influence of the Egyptian film industry on popular culture and collective imagination across the Arab world is widely acknowledged, but little is known about its concrete workings behind the scenes. Making Film in Egypt provides a fascinating glimpse into the lived reality of commercial film production in today’s Cairo, with an emphasis on labor hierarchies, production practices, and the recent transition to digital technologies. Drawing on in-depth interviews and participant observation among production workers, on-set technicians, and artistic crew members, Chihab El Khachab sets out to answer a simple question: how do filmmakers deal with the unpredictable future of their films? The answer unfolds through a journey across the industry’s political economy, its labor processes, its technological infrastructure, its logistical and artistic work, and its imagined audiences. The result is a complex and nuanced portrait of the Arab world’s largest film industry, rich in ethnographic detail and theoretical innovations in media anthropology, media studies, and Middle East anthropology.

Chihab El Khachab is a Junior Research Fellow in Anthropology in Christ Church, University of Oxford.

"A production-side ethnography is a sort of Holy Grail for media studies scholars working in Egypt and the region. A few scholars have done it to a degree, but Making Film in Egypt is in a different class. El Khachab’s work will revolutionize how we think of Arab media production."—Walter Armbrust, University of Oxford

"El Khachab has given us a highly original analysis of the deep connections among labor, technological devices, and temporality in the famed Egyptian film industry. With exciting interdisciplinary insights and rich ethnography, Making Film in Egypt brilliantly reveals hidden yet critical aspects of the creative process."—Jessica R Winegar, Northwestern University

"Making Film in Egypt takes us beyond the glitz and glam of the Arab world’s most influential film industry to examine what everyday practices of production reveal about the intersections of technology, labor, and human inventiveness. Chihab El Khachab reconceives cinema’s enchanting mediation through the mundane and routine anticipations of its creators and their technological devices. From script to screening, he urges us to reconsider filmmaking as the crafting of unpredictable yet inevitable futures."—Yasmin Moll, University of Michigan